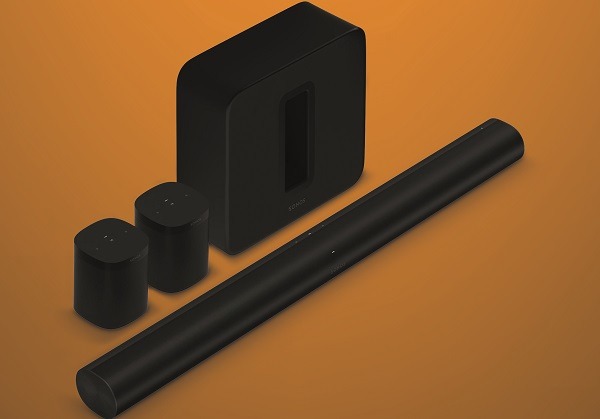 Following the release of its new soundbar, Stephen Dawson liked what he heard when he took the opportunity to put a full Sonos surround system through its paces.

To make it into a full surround system, we’ve combined the Arc with the latest Sonos Sub (Gen 3) and two Sonos One (Gen 2) speakers to act as surround. All operate wirelessly of course.

The Sonos Arc is a complex thing on its own. It’s 1,142mm wide, 90mm tall and 115mm deep. It presents a curved face to the world. Inside are eleven drivers. Each has its own Class D driver. The smart engine – Quad core 1.4GHz CPU – inside the Arc controls all the drivers to deliver the sound that the Sonos engineers want.

Each end of the bar has an elliptical driver for bass/midrange duties, firing out to the sides. Both ends at the front include an angled silk-dome tweeter and another elliptical bass/midrange driver. In the middle of the bar, the final tweeter fires directly forward and has, next to it, two more of those larger drivers.

On the top are an additional two of the larger drivers, angled slightly forwards, for Dolby height channels.

I haven’t mentioned driver sizes or power outputs because Sonos is one of those companies that seems to consider mentioning such raw specifications as gauche.

In addition to its Ethernet port, it has a HDMI socket. This supports the eARC format. You plug it into an eARC-enabled HDMI socket on the TV, and sound is sent by the TV back to the soundbar in this way. So the audio flow is: Blu-ray player (say) to TV to Arc. Or broadcast or network video received by your TV, to Arc. There’s also an optical input.

Of course, you can also play from a network source directly to the Arc.

The Sonos One (Gen 2) speakers are small: 162mm tall and 120mm on a side. They are two-way with, as far as I can work out from peering through the grille, a 20-25mm dome tweeter and a 90-ish mm bass/midrange driver. Each driver has its own Class D amplifier. Unlike many small smart speakers, they include an Ethernet port along with Wi-Fi. Sonos stuff is still single-band 2.4GHz on the WiFi front.

Both the Sonos One and Arc have voice control capabilities. You can set them up to work with either Google Assistant or Alexa. Both have a microphone off button on top along with play/pause and level controls. These are all touch sensitive. If you’re streaming music, you can control level and play/pause with the controls on any of the three speakers.

The Sonos Sub (Gen 3) is shaped interestingly, as you can see from the pictures. It’s 389mm tall, 402mm wide and 158mm deep and remarkably heavy at 16kg. The two drivers are on the inner faces of the slots. Each is around 110mm wide by 180mm tall, rounded at top and bottom. Again, each driver has its own Class D amplifier. There are also two bass reflex ports in there.

The whole setup took maybe twenty minutes and that included the time taken for all four devices to upgrade their firmware. It was just a matter of following the instructions in the Sonos app on iOS or Android. There were no wobbles along the way.

If you use an iOS device, you can finish off running “Trueplay”, which uses the microphone in your iPhone or iPad to capture calibration signals. This, says, Sonos, “dynamically tunes the speaker to the unique acoustics of the room”. It was not clear that it adjusted timings delays for the surround speakers. The tones didn’t seem to be of a kind suitable for that.

On the network music side Sonos supports just about every Internet streaming service – there are 72 of them listed in the settings. I used Spotify and TIDAL.

You can stream from local network resources in two ways. One way is to use a DNLA player app on a smart device to send music from your storage to the Sonos setup. The other is to specify the IP address for the music folder on your NAS in the Sonos app.

At 87mm tall, the Arc could obscure the bottom of some TVs when bench mounted. It has an IR repeater to pass through TV remote signals. It doesn’t come with its own remote, but it takes just a moment to set it to understand the volume control of your TV’s remote.

That means you can use the same remote to adjust the volume even when the TV is off and the Arc is playing network music. Except for those TV remotes which work with RF rather than IR. For convenience, it’d be worth purchasing an IR remote compatible with your TV.

Wireless speaker systems generally use a direct wireless connection between the soundbar and each of the other speakers or sub. But since all the Sonos speakers are connected to your network, I thought it possible that all the signals were carried that way. That would have made keeping everything in sync quite challenging. To check, I played some surround-heavy TV content which was fed to the Arc via HDMI, made sure plenty of sound was coming from the surround speakers, then turned off my Internet router. The sound continued to emerge from the surround speakers. I conclude that in this application the system works like other wireless surround systems.

I expect most people will use Wi-Fi rather than Ethernet connections, so I decided to go that way for the test setup.

I had actually used the Sonos Arc fairly extensively on a standalone basis previously and been quite impressed by its performance. Musically it was really quite good. And for surround sound, it offered a significant sense of depth, along with plenty of height, but couldn’t quite project sound to behind the listening position. Fair enough. Few such systems can.

As far as soundbars went, in my opinion it was second only to the rather extraordinary Sennheiser Ambeo soundbar. Of course, that one costs nearly three times as much as the Arc. But with two Sonos One speakers added for surround and the Sonos Sub for bass, its performance was lifted quite substantially.

First, let’s consider the system as an audio system to go with a modern TV. My own TV is about three years old, so it does not support eARC – the Extended Audio Return Channel. Fortunately, on the day of deadline I got my hands on a new model Sony TV with eARC so I was able to check the Sonos with the latest connection. I set the TV to simply pass the sound through from the connected Blu-ray player to the Arc.

I started with an old Dolby Digital 5.1 test disc. One set of tests simply outputs each of the channels in turn. All 5.1 performed just as they should.

Then there was a “walk around the room” test. The male voice moved smoothly and evenly in a full circle around me, at least as well as my regular system. The move across the front was smooth and wide as well.

The bass was powerful and deep. And the surround was excellent, forming a hemisphere around the listening position with well-defined side, rear and overhead content. It seemed to me that the whole sound fi eld was shifted further back into the room, with more sound behind the listener than I’m used to with a properly calibrated home theatre receiver. I’m guessing that would be due to insufficient delay on the surround channels. There seem to be no delay adjustments available.

The system seems to run with Dolby Surround, or something akin to that. I often use the scene where Ms Crane arrives at Norm Bate’s motel in the 1998 Gus Van Sant remake of Psycho. Rain is pounding the roof of her car as she drives up. This Sonos system had it pounding nicely overhead, even though the audio is mere 5.1. Again, it was pulled a little further to the rear than it should have been.

I’ve read that Sonos does not support DTS. So of course, I put on a DTS disc to see what would happen. What did happen was that the Sonos system produced high quality surround sound without any seeming problems. I don’t have any DTS content quite as diagnostic as my Dolby tests, so it’s possible that the Blu-ray player was being told by the Arc that it  didn’t support DTS, and was therefore converting the sound to something it could cope with, such as two channel PCM with embedded surround information.

The whole surround thing is a little opaque. There’s no real way, for example, to switch on or off Dolby Surround with material fed via HDMI to the unit. I went digging around in the app to see just what control you could exercise. There’s a setting called “Surround Audio”. This has two sliders for the level of the surround speakers, one for content received via HDMI or optical, the other for network audio.

These have an adjustment range of -15 to +15, but they don’t actually say 15 of what. After playing with it a bit, I’d say they’re counting decibels. So at -15 you can only hear output from one of the surround speakers if you get very close to it.

That’s somewhat helpful, because there is no pure stereo setting. There is a special setting for “Music Playback”, but the only options are “Ambient” and “Full”, not “Off ”. The “Ambient” setting extracts some of the front content and seems to slightly delay it, playing it through the surrounds at a lower level to give a greater sense of space. “Full” just seems to repeat the front channels into the left and right surrounds.

The music performance was very solid, and way better than any soundbar ought to sound. You won’t get quite the tangibility of sound that you might achieve with the right pair of high-quality bookshelf speakers. But it was nonetheless clean, properly balanced and very well-articulated. And the bass extension and power were simply excellent.

Playing Billie Eilish’s When We All Fall Asleep, Where Do We Go? the extremely powerful bass underpinnings of the music were conveyed with remarkable faithfulness.

Sonos says only that the Sub has a “Frequency response as low as 25 hertz”. I measured 27 to 92 hertz ±3dB. At the high end, it looks like Sonos applies an 18dB/octave low pass filter above around 90 hertz.

Without the Sub, the Arc can reach down to 45 hertz. It’s likely that with the Sub connected it is relieved of any work below 90 hertz, freeing up its drivers for higher performance above 90 hertz.

For a total system price of just under $2,400, the Sonos Arc-based surround system is not just a good performer, it will outperform a similarly priced system of discrete speakers, sub and receiver. It can fill a good sized room with loud quality music, and deliver a truly creditable performance on movies.

The only real limitation is the lack of high-resolution audio support. It tops out at 48kHz sampling.

Midwich teams up with Fusion Signage