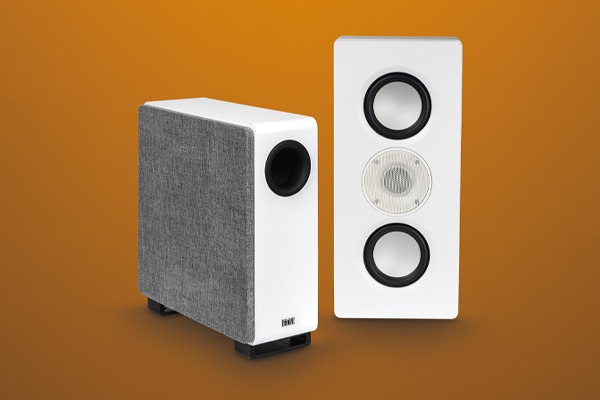 There’s a clear line between installation loudspeakers and regular consumer models. The latter are easier to install and don’t require any (or much) wall cutting, but they use up a lot of space. Installation speakers, though, are either permanent or demand a lot of repair work if removed.

Which brings us to Elac’s new Muro series of loudspeakers. They aren’t for in-wall installation, but neither do they consume much space. That’s because they’re designed with a slimline form factor that lets them be wall-mounted and keeps them inconspicuous.

The range consists (so far) of two speakers and two active subwoofers. A soundbar is also coming.

The two speakers are each only 94mm deep, including grille. They come in black and white. Their grilles are removable. The black ones have a black cloth grille. The white ones come with a tweedy grey grille. Go black for less visibility. The white/grey models look quite stylish.

The two models are fittingly called ‘long’ and ‘short’. Let’s start short. This one is also called ‘surround’. It’s a two-way, three-driver unit that’s 400mm long and 81mm wide. In the middle it has a 25mm soft dome tweeter behind a protective metal grille. Above and below it are two 100mm aluminium cone bass/ midrange drivers. Around the back are two spring-loaded binding posts for the cabling.

The long speakers – also called LCR – are 650mm long and have the same driver complement in the front middle. But they also have two more of what look to be the same bass/midrange drivers further towards the end of the enclosures. They aren’t really drivers. They’re passive radiators.

A single pair of connections are provided on these ones as well. But with a twist: there’s a switch on the back. You set it one way if the speakers are installed vertically, the other way if they’re put in horizontally. Elac says that this changes the operation of the crossover network to adjust for differences in the dispersion
pattern. That leaves me a little puzzled. My understanding is that it’s the relative position of the drivers which determines the pattern. A vertical stack of drivers provides a wide horizontal dispersion and a narrow vertical one. A horizontal row widely disperses the sound vertically, but narrowly in the horizontal direction.

Both the long and the short speaker have mostly the same specifications. Their frequency response is rated at 75 to 35,000Hz, their maximum power handling
at 80W and their sensitivity at 86dB (for a nominal one watt input). I would have expected greater bass extension from the long speakers with their passive  radiators, along with higher sensitivity. The short speakers are rated at 6 nominal impedance, the long ones at 8.

Clearly these speakers are designed to be used with subwoofers to deliver the bass. There are two options, and both of them are available in the same white or black colour scheme with the same coloured, removable grilles.

They use the same slimline philosophy. In their ‘natural’ position, the smaller one stands 386mm tall and 361mm wide, but it’s only 136mm deep. And that includes the grille. This sub – the SUB2010 – is bass reflex loaded. Its port is on one of the narrow ends while the amplifier and connections are on the other narrow end. That allows it to be pushed up close against a wall.

In the other face is a 200mm bass driver, powered by a 120W amplifier. Elac rates its frequency response at 32 to 200Hz. There are some very cool additional features, but I’ll return to them shortly because they apply equally to the larger subwoofer.

That larger subwoofer is only a little taller at 399mm, but noticeably wider and deeper at 463mm and 181mm. Its layout is much the same, except that it uses a
sealed enclosure rather than a bass reflex design, so there’s no port. Inside there’s a 200W amplifier to drive the 250mm driver. Elac rates the frequency response of this subwoofer at 28 to 200Hz.

Now, cool feature number one. Both of the subwoofers have four small screw holes on their faces. These are normally hidden by the grilles. But you can pull off the grille and screw in four conical rubber legs. That lets you install the subwoofer horizontally on the floor. I doubt that one should do this, but I could imagine
some users placing a large pot plant on it, making the subwoofer virtually invisible. Out of the box there are two metal rails upon which the subs normally rest. These can be readily removed.

You can also use two of the rubber feet with the two included wall brackets to, well, wall-mount the subwoofer. In this configuration the driver is facing the wall and, again, the grille is removed.

Cool feature number two. Both subwoofers have a built-in wireless receiver. The matching wireless transmitter is an option – it costs $295 – but clearly there are quite a few circumstances where this option could solve installation problems. I didn’t have this to hand so I didn’t test it. Apparently it transmits the signal at CD quality, 16 bits and 44.1kHz sampling. That’s actually overkill for a sub since it only needs to handle signals up to a few hundred hertz.

Cool feature number three is related to the apparent dearth of controls on the subwoofers. Neither of them has any
of the usual ones. The amplifier panel has only two RCA inputs for the signal,a power connection, a USB socket for
firmware upgrades, a power LED and just one button. That one’s for pairing with the wireless transmitter and for resetting the subwoofer. There’s no low pass filter control, phase switch, nor even a level control. But that’s because you do all that with an app.

The Elac Sub Control 2 app is available for iOS and Android. I used the latter. It communicates with the sub using
Bluetooth.

There’s nothing to setting up the main speakers. They have slots in them for hanging on wall hardware, so that’s where I put them, vertically orientated. The connections wouldn’t hold my banana plugs firmly so I removed them and used the bare cable in the spring clip section.

The subwoofer comes with the level pre-set to 75%. I used the Sonos Amp to drive each pair of these speakers and a subwoofer, and that level proved to be a good level to allow the Sonos app to balance everything out. But as I delved further into the Elac app, more functions were revealed. It has its own preset EQ modes – Flat, Cinema, Night and Music – and it allows you to continuously vary the phase between 0º and 360º, apply a group delay of up to 20ms, set the low pass filter, set your own own parametric equaliser with up to eight set points, with adjustable Q, centre frequency and gain for each. And it has an auto-EQ function.

That uses your phone’s microphone to measure the output. You do it twice, once with the phone right next to the subwoofer, once with it in the listening position. The app then calculates an adjustment curve. That worked easily and smoothly.

Without a doubt the bass output from the main speakers was fairly light, although the frequency response figures seemed misleading to me. I felt that the long
speakers easily handled below 75Hz, with decent output down to perhaps 60Hz.

With the speakers not having to handle much in the way of bass – I left all that to the subwoofers – they delivered very high levels very comfortably. I
had no EQ on them, but their tonal balance was respectable, perhaps a little treble forward. I’d expect in realworld installations the system EQ would be used to smooth things out further. The important thing was that the full bandwidth was carried with clarity and precision and plenty of detail.

The subwoofers were extremely good. I especially liked the larger one, with its slightly greater deep-bass authority. There was some real heft there, despite
the quite compact size of the unit.

I measured it up close to see what it was producing, and it came in at 28 to 75Hz ±3dB. It was at 33Hz that the output fell away – quite sharply. It looked to be
dropping at around 24dB per octave. The natural roll-off from sealed enclosures is generally far more gradual, so I’d say that the DSP inside has a pre-set high pass filter to protect the driver from too much really deep bass. Nonetheless, the sub clearly and cleanly carried just about all musically important bass.

As did the smaller subwoofer. It didn’t manage the rumbles and dinosaur footsteps as effectively, but when it came to bass drum it delivered fully. Since the
bass driver is smaller, you’d expect the bass to be a bit less extended. And it was. Being a bass reflex design, you’d expect that bass to fall away more quickly as it
gets deeper. And it did.

I measured this one on all four of the main EQ settings. It wasn’t as smooth as the larger sub. The smoothest setting was ‘Music’. That had two peaks of roughly
the same level in the output response: at 34 and 62Hz. Between them was an 8dB dip. Ignoring that, the response was 30 to 86Hz ±3dB. Below 34Hz, the response fell away at 36dB per octave.

‘Flat’ had the 34Hz peak down by about 3dB. ‘Cinema’ had it up a little from that. ‘Night’ pushed the deeper bass – everything below 50Hz, to a new plateau
about 9dB down. That makes sense and could be quite useful. The deeper frequencies are the ones that tend to most penetrate walls. Reducing them can
leave an impressive overall result without disturbing the neighbours anywhere near as much.

The Elac Muro speaker system is a smart, effective and good sounding home theatre solution from a brand well-known for quality sound.

Klipsch adds to its commercial and brand ...