Episode’s new in-ceiling speakers are truly premium units that may even be too good for their specified purpose, writes Stephen Dawson.

Coming into the crowded architectural loudspeaker market is Episode Speakers with its Signature range of speakers, which include ceiling and wall models of different sizes and functionality – including even switchable bipole/dipole surround models. Here I’m sampling two models from the range

The SIG-58-IC and SIG-78-IC are in-ceiling models. They are available both with and without a backbox. I wasn’t supplied with those.

Both speakers are two-way models. Both employ an adjustable 25mm tweeter held over the centre of a 200mm woofer. And both are identical in another way that we will get to. But both are also quite different.

The SIG-58-IC is the lower-cost model at $1,300 per pair. It uses a polypropylene woofer with an inverted rubber roll surround. That is, the curve in the surround is concave outwards, rather
than the usual convex. The roll surround is ribbed. The silk-dome tweeter sits in a pedestal several centimetres forwards of the woofer cone. Apparently both it and the woofer have vacuum-deposited titanium on them. The tweeter is mounted in an oval faceplate and can be freely swivelled by around ten degrees in any direction. On the edge is a slide switch which can adjust the tweeter level by plus or minus two decibels.

At the back is a substantial crossover network. The connections are spring loaded terminals which can accept large gauge bare cable or banana plugs. If you do use the backbox, a speaker connection on the rear of the speaker mates with the box so that wiring can be connected to terminal on the backbox.

Episode rates the impedance of these speakers at eight ohms and the power handling at 130W peak. I’m not quite sure what “peak” means. They’re fairly sensitive at 90dB (presumably for 2.83
volts, measured at 1 metre) so they ought to produce plenty of sound with fifty watts available. If they’re used in height roles, then they’ll rarely be called upon to handle heavy power loads. Episode also rates the frequency response from an impressive 36 hertz up to 20,000 hertz, without specifying the decibel band.

The SIG-78-IC uses different materials for its drivers: pure titanium for the tweeter and a honeycomb fibreglass Nomex material for the woofer cone. The woofer has a similar inverse roll surround
to the other speaker. The tweeter also has an oval faceplate, but it can only be swivelled on one axis, not in any direction. Both the tweeter and the woofer have +2/0/-2dB level switches. This speaker has an even more substantial crossover network, thanks to that extra switch. Episode specifies these speakers at 8 ohms impedance, 160W “peak” power handling, 91dB sensitivity and a frequency response of 32 to 20,000 hertz.

Both speakers come in two sections. The main speaker part is 236mm in diameter and is locked into an outer collar by means of four levers. The collar sections are identical for both speakers. I installed the collars from the SIG-58-IC speakers into my chipboard test box and when I wanted to switch over, it only took about ten seconds per speaker.

Each of those collars, in turn is easily fixed in a ceiling hole. Once the hole is cut the right size, you just push in the collar and press four small red buttons on its face. Each of those releases a spring-loaded swing arm at the back which snaps down on the back of the panel into which the collar is inserted. Once they’ve swung into place you can further tighten them with screws at the front. At that point, I tried pushing the locking lugs back by pushing on the front screws. It didn’t work. They seemed locked in place, but I figured I’d be able to grope around at the back to swing the locking arms back into place.

At least, that was my expectation. The speaker sections came out of the collars easily. But the collars were stuck. The manual says that when you apply “inward pressure on the screw of the
push lock from the front of the speaker, the push lock dog should retract.” It adds that “at times the push lock may require additional pressure inward while moving the screw driver back and forth to release.” 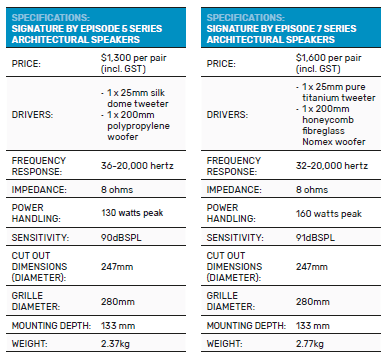 But nothing I did worked. I could not push the screws in regardless of any kinds of manipulation. I tried working both the back and front at the same time to no available. After half an hour I gave up trying to do it that way. Instead I took the back off my box. Fortunately I was able to dismantle the sections of the collar holding the lugs in place. Removing the two screws on each of those sections releases the various spring-loaded components. Even then, it took a lot of heavy wiggling and some brute force to get the lugs to let go. When I finally managed it, reassembling the two collars was a little tedious but straightforward.

As usual, I listened to these speakers as though they were full on stereo speakers. I installed them in my floppy chipboard box – it’s around 200 litres capacity, so it gives very little acoustic cushioning to the installed speakers, much like a ceiling space. They were directed outward into the room, like front speakers in a stereo system. I fed them without any kind of room or speaker correction using a Schiit Audio Vidar power amplifier and Saga S preamplifier, with a Denon streamer as the digital source.

So, I’ve over-listened given their likely applications.

What I heard from the SIG-58-IC speakers was extremely impressive. The song “Jacob’s Ladder” from Rush’s Permanent Waves was presented with a smooth tonal balance, but a driving intensity from the bass and drums. The bottom end was full and even presented a solid kick drum thump, while the rest of the drum kit came through without significant dynamic compression.

Switching over to the track “Nobody” from Ry Cooder’s Jazz, the voices were full and immediate. There was a somewhat rich sense, as though the midrange was perhaps a little recessed. But there was also plenty of air and an attractive openness to the sound.

The group George’s year 2000 recording of “Holiday” is a naïve, homegrown affair. Its rawness was nicely presented, while providing a clear window into the purity of Katie Noonan’s vocals.

That transparency carried through to the rather less than pure vocals of Elvis Costello singing “I Want You”. There was excellent presence on his voice. On this, as with the other tracks, imaging was so-so, but that was inevitable given the mere 90cm separation between the two speakers in the one large box.

As a kind of torture test I use the old track “Lay Down (Candles in the Wind)” by Melanie. The choir is rather harshly captured in the track and some speakers deliver it positively painfully. The SIG-58-IC speakers managed to keep the energy of the track while keeping the harshness under control. I got a strong impression again of a slightly restrained midrange and upper midrange, making for a smooth delivery.

The general character of the SIG-78-IC speakers was similar, with slightly more bass, but also a little less air in delivery.

Given the excellent tonal balance of the sound produced by both sets of speakers, I figured I should do a quick objective test, particularly of the bass performance. So I put a measurement microphone just a few centimetres from the tweeter of the right hand speaker in each case and ran a pink noise test.

This kind of measurement shows what the speaker is pumping out into the room while minimising room effects, which are necessarily much lower in level.

The SIG-58-IC speaker was essentially dead even down to 55 hertz, below which the output fell at around 12dB per octave. That meant that 40 hertz was at -6dB, still an impressive output. With the treble level switch in the middle position, treble was up by 6dB at 10,000 hertz, increasing to +9dB at 18,000 hertz. Rather than lifting or lowering the entire output of the tweeter, the level switch tended to apply a slope, with around 3dB of effect at 18kHz.

I was unable to trace the circuit, so I’ll assume that the middle position is the “natural” setting. I’d leave it at that and allow the home theatre receiver to do any necessary corrections. I’d just note that a boosted level in the top octave, while not being consciously detectable as that, can often add a sense of spaciousness or airiness of the kind I felt that I experienced with these speakers.

Perhaps that’s why I preferred the sound of the SIG-58-IC speakers over that of the SIG-78-IC. The latter also had a high frequency boost, but it didn’t really get going in the same way until more
than 15,000 hertz. At the bass end, the shoulder was at around the same point – 55 hertz – but the slope was a little more gentle, so that the -6dB point was 38 hertz.

Both the Signature speakers are truly premium units. I almost feel that they’re wasted being relegated to doing “height” speaker duty in an Atmos system. If you obtained their Theile & Small parameters and built suitably solid, properly tuned enclosures to house them, they’d make decent full range front speakers.