It’s not the easiest product to explain, but Stephen Dawson says people would be remiss to underestimate the power of the Huddle Hub One.

You will probably have noticed that when I review, say, a DVD player I title the review something like Panasonic MODEL-XYZ DVD Player. But when I came to the Huddle Hub One, I was initially at a loss as to what to put after the product name. Who knows, maybe the Huddle Hub people are too, since they don’t put a product description in the heading on the product manual either?

Well, let me have a go at it. The Huddle Hub One is a piece of network hardware that makes computer and device screen sharing easy. It is a network box that allows up to four groups of people to share their device screens with each other within each group, and to display some of them on an attached large screen. When used in conjunction with video conferencing software, it also allows a webcam feed, or can group several computer cameras into a single feed.

I fear I haven’t properly conveyed the power of this unit, so let me say this: with a Huddle Hub One, you can:

The Huddle Hub One is a small device, amply covered in aluminium fins to provide cooling. The front has a power button and LED to indicate that it’s on. The back has an HDMI output, a USB connection, an Ethernet port and two WiFi antennae.

You plug the HDMI output into a large monitor, TV or projector, preferably UltraHD in resolution. You plug the Ethernet port into your network so that devices on the network can talk to it. 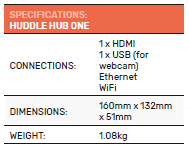 The WiFi is not for connecting to your network. It allows for direct connection with WiFi-capable devices. This is worth spending a moment on. Your staff will be logged onto the office WiFi network, so they can interact with the Huddle Hub One in the usual way through the network. But you may have invited participants, visitors, with whom you don’t wish to share network access. They can connect to the Huddle Hub One directly via WiFi, choosing it as a WiFi access point.

Should you like what you read, except that you need such a device which connects wirelessly to your network, then the Huddle Hub One+ does just that.

Importantly, all WiFi communications with the unit are encrypted to keep content secure.

Plugging in the Huddle Hub One is the work of only a couple of minutes. It throws up a standby screen that displays weather, time, the connection group, plus the IP address for both company access and guest access. The latter uses huddlehub as both the SSID and password, but both can be changed in settings.

Of course, there’s no setup involved in connecting to your network since moments after you plug in the Ethernet connection from your router, it will have allocated the IP address and otherwise set up the unit.

The unit can route display information all over the place with a minimum of fuss. Those serious about collaborative projects ought to check it out.

Then it’s simply a matter of using a browser of each device that’s going to be using the Huddle Hub One capabilities to view its internal web page. People on the connected network just key in the indicated IP address. Guests will first need to use the WiFi connection to log onto the Huddle Hub One-generated access point
and enter the password indicated on the screen. Now almost certainly they won’t have the Huddle Hub software on their device, but that’s not a problem. As soon
as they type in the indicated IP address into their browser, they’ll be shown a home screen with apps for Windows, MacOS, iOS and Android.

Actually, the latter two simply link users to the relevant app store where they can obtain the most up-to-date version off the app. This is okay for people on the network into which the Huddle Hub One is connected. But it may not work well for visitors because they’ve connected their WiFi to the Huddle Hub One rather than an internet-capable access point. So, it may be wise to suggest to guest participants to first download and install the software, and then connect to the Huddle Hub One. But the Windows and Mac buttons start a download of the software which is actually embedded in the Huddle Hub One. Since it’s a direct transfer, the 60MB-ish software downloads virtually instantly. It can then be installed. It will check home to base and inform the user if a newer version of the software is available.

You can do some of this stuff in the software, but by putting purposedesigned hardware into the mix, things become both easier and more reliable. Once I finally wrapped my head around what this system was capable of delivering, I found it did it every time without the slightest wobble.

For example, just before firing up Word for the present writing session, I walked around my room and switched on all my devices. I switched on the OLED TV
to which the Huddle Hub One was connected. This showed the welcome screen, giving the relevant IP addresses for connections. I fired up my old Surface Pro 4 and once it was going, I connected to the ConnectionBR group and hit the ‘Play’ button. A couple of seconds later its screen appeared on the TV. I switched on my Mac Mini, joined the group and told it to receive. The Surface Pro 4 screen appeared on it.

I went around the office turning on devices, joining the ConnectionBR group with each of them. Some automatically went into ‘receive’ mode; others I had to click the ‘receive’ icon. Then I hit the ‘Play’ button on the Mac Mini and its desktop was displayed everywhere. Right now, that desktop is showing on the Mac’s own monitor, of course, plus on the OLED TV, plus on the Surface Pro 4, plus on my Surface Pro 2017 – my main working portable – plus on my iPhone 6, plus on my Huawei P30 Pro Android phone, plus on my old Samsung Tab A Android tablet. Plus on monitor 1 of the Windows desktop computer on which I’m writing this very review (it has two monitors attached).

How to change things?

On this computer, I tapped on the menu dots on the little control panel and chose ‘Disconnect’. I now had my regular desktop back (and could drag this Word window back onto the main monitor).

On that same computer I went again to the Huddle Hub control in the Windows status bar and connected again to ConnectionBR, then clicked on the ‘Play+’ icon. Because I have two monitors on this computer, a pop-up asked me to select ‘Display1’ or ‘Display2 (extended)’. That is, I could choose either the main or  extra screen to share. 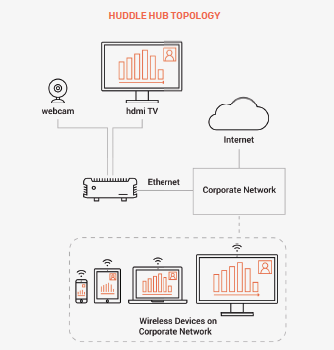 That was the only point at which I was kept waiting. It took probably a good seven or eight seconds, but a replica of the second display of my screen appeared on the OLED TV next to the Mac display.

Because both the extended display on this Windows computer and the display of the Mac Mini are full HD resolution, they each mapped perfectly onto the UltraHD OLED display, delivering excellent clarity. (Once I adjusted the video-orientated default picture settings on that HDMI input.)

I switched the Huawei phone to ‘Add Presentation’ and both the existing screens on the TV moved up, while the phone’s display appeared below them. It was in portrait mode, but when I put the phone sideways and ran an app that displays in landscape mode, the phone display on the TV followed suit, occupying a larger area of the bottom half of the OLED display. I went to switch the iPhone to ‘Add Presentation’, but that wasn’t an option, so I did that with the Surface Pro 2017. Both the phone display and that one appeared on the TV within a couple of seconds.

Meanwhile, the iPhone, Android tablet and Surface Pro 4 continued to show the Mac’s display. There’s a delay  between the source device and its display on the TV or on other devices, but it seemed to only be about one second. That’s way too much to allow viable game play, for example, but shouldn’t be a problem in sharing data, images and other material in a conference. All the reflected displays identify the source at the bottom along with the Huddle Hub logo. In the settings of each app you can switch off source display, but the logo remains in place.

I doubt that I’ve fully covered everything the Huddle Hub One is capable of delivering. Especially since a significant software upgrade is just about to happen
which will allow something called ‘totally app-less presentation’. But what I have covered is really every impressive. The unit can route display information all over the place with a minimum of fuss. Those serious about collaborative projects ought to check it out.

I have only one complaint. After using the unit I uninstalled the Huddle Hub One software from all my devices, but it remained on all three of the computers. It wasn’t in the usual folder for programs, but here: ‘C:\Users\StephenDawson\AppData\Roaming’. Furthermore, it was still being auto-loaded on boot. To manually delete it I had to disable its auto startup, reboot and then I could eliminate it. That is not good practice.