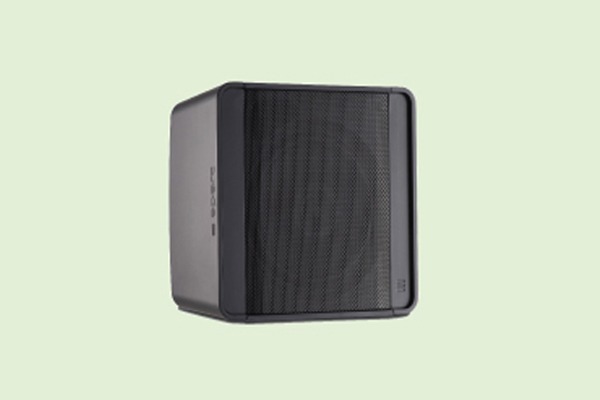 There’s no problem a little volume can’t solve when it comes to the KUBO5T speakers from Apart Audio. Stephen Dawson explains.

Apart Audio is a firm in Belgium specialising in all manner of installation audio and control gear. Perhaps ‘specialising’ isn’t the right word, given the breadth of products it offers. By my count there are 10 series of speakers in just its ‘cabinet’ offerings. One of those is the Kubo series. That consists of four models, of which the KUBO5T is the top of the range.

Top of the range it may be, but the KUBO5T is small. As the name implies, it’s near cubical, with a maximum dimension of 163mm.

The enclosure is not necessarily quite as tall as the specification shows. That’s because at the top and bottom – or at the sides, if that’s the way you want to put them – there are magnetically secured end caps. Underneath both are screw clamps for what Apart calls its ‘K-Mount’ brackets. The brackets are included, so the speakers come ready for wall or ceiling mounting, if desired. Also included are screws for attaching the bracket to a wall, and cables for suspending the speakers. Those end caps hide all those fittings.

Also under one of them is a six position selector switch for electrical handling of the signal. In the bottom position the speakers act as regular low impedance loads – albeit with a 16Ω nominal impedance rather than the more common 8Ω. The other positions provide for high voltage feeds: 3W, 6W, 15W or 30W at 100V; 1.5W, 3W, 6W, 15W or 30W at 70V. The speakers are rated at 80W ‘Dynamic’ in low impedance mode.

Should you only need low impedance mode, you can save money by choosing the KUBO5, which are the same except for transformer stuff. But their nominal impedance is also the more conventional 8Ω.

(Also available, the even smaller, single driver KUBO3T and KUBO3.)

I can image the KUBO5T being useful for small arrays without the need for going transformer. If an amp supports 4Ω per channel, then you can simply daisy chain four of these for each channel without load worries.

Facilitating that are the connections, which are at the back. They use Euroblock terminals, and there are two on the back of each speaker. One is for the input signal, while the other is labelled ‘link’. You can connect that to the input of the next speaker in the chain.

Also on the back is a quarter-inch threaded mounting point.

The enclosures are made from ABS plastic with a steel grille. The grille is screwed down but can be removed if required. They are available finished in black and white.

Inside each is a 133mm woofer and a 25mm tweeter. The enclosure is bass reflex loaded, with a small port underneath a corner of the grille. As mentioned, they are rated up to 80W ‘dynamic’ power and 50W continuous. Apart says that they are capable of producing up to 106dB of sound pressure at one metre. It rates their sensitivity at 92dB at one metre for 1W input. The 14dB difference between 92 and 106 turns out to be a ratio of 25:1, which suggests that the maximum output is at 25W input. Presumably, beyond that things get a little more stressed.

No beating about the bush here: these speakers are not designed to, nor are they able to, deliver high levels of bass. Playing music on them, it was noticeable by its absence.

That said, the louder I played music on these speakers, the more balanced they seemed. That was due to the bass that was being produced, recessed though it was, being brought up to a level of audibility. Indeed, within reason, the louder the better in general for these speakers. They seemed to relish power and sounded nicely dynamic in doing so.

The Don Burrows Quartet, recorded live at the Sydney Opera House back in the 1970s, simply sang from these speakers, the cymbals ringing musically, with precise and tangible stereo imaging. And there was excellent detail. I noticed for the first time the little pulsations in the wind noise surround Burrows’ clarinet. The drum kit was precise and very controlled. The subtle underplaying was fully audible, easily followed, yet when the drums were struck with force, they were delivered without restraint.

I almost can’t believe I’m writing this about a pair of such small speakers, especially ones selling for under $500 for the pair. It seems that Apart Audio has put some very decent drivers in those little enclosures.

When I switched over London Calling by the Clash, the sound seemed thin and harsh, until I turned it up. Even at the higher volume the bass guitar line was a hint rather than central, and if there was a kick drum, it existed only in the harmonics. Nonetheless, the ability of the speakers to produce high levels – they easily maintained an average of around 92dB SPL (C-weighted) at 2m – was impressive.

That mid-upper frequency emphasis at low levels seemed to be a theme. Putting on the Tzimon Barto Liszt recital, the buzziness of his piano was pushed to the fore, until I turned the volume knob clockwise.

Oh … where was I? Sorry, I was entranced by that music. A lot of the second Hungarian Rhapsody is spent up on the right end of the keyboard, which is where these speakers excel. Those keys rang out sweetly, delightfully, despite the high level I was pouring into the speakers.

With orchestral classical things were slightly less clean. That slightly forward upper end tended to coincide with the harmonics of the violins. But, yet again, a bit more volume smoothed things out.

You can see what Apart has done here. This emphasis is just in the right band of frequencies to enhance the ease of understanding the human voice.

And obviously speaker installations based on the KUBO5T speakers will frequently be used for voice announcements. Ensuring that those can be understood in public spaces is vitally important.

I dragged out my old mixing panel and amped up my own voice, using a dynamic microphone. The speakers produced a clear, clean sound, amplifying my voice to almost terrifying levels without clarity being adversely effected. The softer bass didn’t detract from coherence. That slight upper peak probably improved it.

The speakers were also fairly immune to feedback, with not a hint of it unless I put the microphone in a particularly silly position. That suggests a lack of significant peaks in the output, especially in the upper treble where feedback can be most problematic.

As I’ve mentioned, the sound of these speakers was pretty smooth and tonally well-balanced, apart from a clear lightness in the bass. Which is what you’d expect from such small speakers. I was interested in where the bass roll-off actually begins, so I measured the output of the speakers from right in front of the centre of the cone. That was in order to minimise room effects. As it happens, the output was reasonably smooth across the frequency range. Leaving aside a peak at around 15,000Hz, they delivered from 110 to 20,000Hz, ±4.5dB.

Focusing on the bass alone, there’s a gently rising output with descending frequency from 300Hz, peaking up by 4.5dB at just under 200Hz. Below that the output starts falling away at 18dB per octave. 100Hz is more than 12dB below that peak.

I tried measuring up close to the bass reflex port as well, but it also seemed to peak at the same point.

A subwoofer that works well up to 200Hz would be most suitable for use with these speakers.

The Apart Audio KUBO5T speakers are versatile units, ideal for places where good levels of midrange and treble sound is required.

Will HDMI keep up?