In an AV world in which the LCD display seems to be ubiquitous, Ian McMurray takes great pleasure from one of the areas in which projectors still excel.

I may have mentioned this before – I tell anyone who’ll listen – but I’ve always been a big fan of projection. So far as my 20+ year involvement in the AV industry is concerned, projection is where I started when I joined Texas Instruments (TI) back in 1996 to be European Marketing Manager for the company’s shiny new DLP technology with all its weird little mirrors flipping backwards and forwards.

Back then, projection was about the only way you could get a decent 60” image on the wall. Yes, LCD displays were around – but even if you could find one that big, it would have been fiendishly expensive and delivered a pretty average image.

Something else I’ve probably mentioned before is that TI pretty much bet the farm – well, the back paddock, anyway – on DLP projectors being at the heart of  a new generation of TVs that would be almost as slim as LCD panels, but would deliver visibly superior images.

But: surprise, surprise. Those Japanese display manufacturers weren’t standing around looking at their work and saying to themselves: “Wow! This is the best we can ever do.” They quietly went away and made their panels better. And better. And better.

Not only were they better, of course, but also cheaper. What they ended up with was a pretty compelling proposition. It was a proposition that threatened to undermine almost the entire projection industry.

For a while, things were looking somewhat bleak. It wasn’t long before the likes of Proxima and nView had gone to the wall. I have to admit, I wasn’t sure where projection was going. I should have had more faith because, progressively, the industry has reinvented itself and made itself relevant again.

It’s done that in numerous ways. We had networkable projectors and projectors that didn’t need to be attached to a PC. We had short throw and ultra short throw projectors that took projectors into new places and single-handedly made the IWB phenomenon possible. Most recently, we’ve seen projectors almost universally adopt solid state illumination, finally overcoming the elephant in the room that was cost of ownership.

But through it all, we’ve had high brightness projectors. Back in 1996, Electrohome – whose projection business was subsequently bought by Christie – had the DLP-based VistaPro, delivering a whopping 1,300 lumens. That seemed amazing. Who would have thought we’d reach 40,000 lumens just 15 years later? But I digress…

What high brightness projectors have always been capable of doing is delivering wonderful images. And with projection mapping, those wonderful images become utterly spectacular.

In theory, almost any projector is capable of projection mapping. The bare minimum requirements are high brightness, high contrast, high resolution and a high quality lens. That describes many of the projectors available on the market today. What really makes a difference is a projector’s ability to support edge blending and warping – and the degree of processing power it can apply to the task. That’s where the likes of Barco, Christie, Digital Projection and Panasonic really start to shine (pun intended…). Not all are created equal, however: to be useful, image manipulation functionality needs to be easily accessible and simple to use.

It’s important to make a distinction between simple geometry adjustments for creating softedge panoramas on uneven surfaces on the one hand and, on the other, fully blown and highly intricate mapping projects featuring 3D files and physical objects with surfaces that are very detailed and uneven. Both scenarios, and everything in between, can be called projection mapping – but that can be misleading.

That said: one of the beauties of projection mapping is that, while it’s normally associated with thrilling visual spectacles, it doesn’t have to be done on a grand scale. 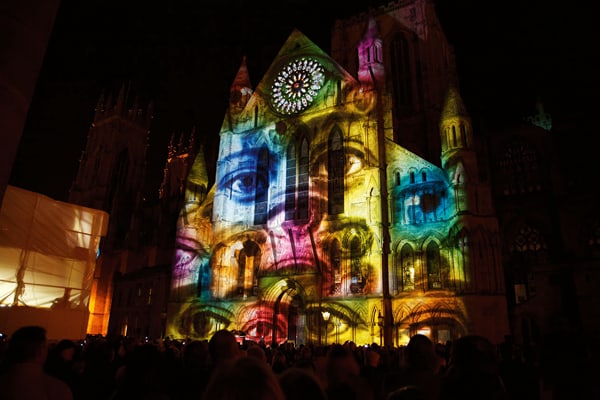 The advent of solid state illumination such as lasers has benefited projection mapping. Historically, the presence of a lamp meant that the ways in which projectors could be mounted were limited. That’s no longer the case, and it brings with it even greater creative freedom.

The increasing availability of 4K resolution in projectors is also hugely beneficial – not only in terms of detail, but in the fact that some in the projection mapping industry claim that a single 4K projector can replace four blended HD projectors – making mapping more affordable and thus opening new market opportunities.

What we’re also seeing is the availability of increasingly powerful media servers from companies such as 7th Sense, AV Stumpfl, d3 and Green Hippo. Here, it’s not just the hardware – it’s the software that allows images to be aligned, modified, warped, bent and morphed to fit the projection surfaces. Here, they work in tandem with projectors.

So what does the future hold for projection mapping? First, it has to be said that phosphor-illuminated projectors have not yet scaled the brightness heights of their lamp-based forebears. That can only be a matter of time.

Media servers – integral to many high end projection mapping deployments – are, in common with the rest of the computing industry, growing in processing capacity. I heard recently, for example, that the d3 4x4pro not only allows 16 simultaneous HD outputs to be played from one media server, but it also enables different resolutions to be genlocked.  This means that it is now possible to seamlessly utilise any combination of projectors in a projection canvas without being tied to the lowest common resolution.

Ease and speed are also areas of focus (second pun intended…) Where projection mapping was once a highly laborious, time-intensive task, it is increasingly being automated in areas such as alignment. Camera-based shape recognition and auto-calibration for blending will dramatically speed up the process and accuracy of any mapping installation.

Add to all of these developments the growing availability of inexpensive apps and software solutions that are coming to the attention of the new generation of creatives without whom projection mapping would be a theoretical capability rather than a thrilling reality, and it becomes apparent that there is the potential for real growth in the market – fuelled not just by the even greater wizardry of which projectors and servers are becoming capable, but also because of how the barriers to entry are being progressively lowered.

That would seem to be supported by a conversation I had with Dan Goldstein of AVIXA the other day. He’s convinced that one of the big growth areas for the AV industry will be delivering experiences.  Millennials and Generation Z, he believes, typically prize in-person experiences over owning ‘things’ – and nothing delivers an experience quite like projection mapping.

Mapping shows the projection industry at its best. But: the single best thing about it is that you’ll never, ever be able to do it with LCD displays. And that makes this projection fan very happy.