NEC Australia and the Australian War Memorial (AWM) have uncovered the identity of lost World War I diggers with a successful trial of facial recognition technology.

The testing was on a range of images photographed in 1916 by a husband and wife duo, the Thuillier family, in their home village of Vignacourt, just behind the Western Front battle lines in Northern France.

The collection was part of almost 4,000 uncovered in a wooden chest in the Thuillier’s former farmhouse attic, almost a century after they were taken. A sizeable amount of these images were purchased by an Australian philanthropist and generously donated to the memorial in Canberra.

They were displayed in a roadshow, aptly named ‘Remember Me: the lost diggers of Vignacourt’, which uncovered the identities of a few diggers. But in just two days of testing and matching against other collections in the AWM collection, scores of soldiers were identified. 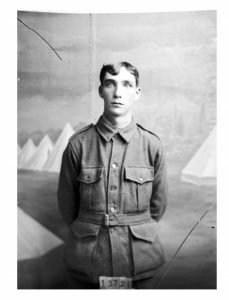 Pre-war image of private Deegan that was used to identify the one in the Vignacourt Collection.

“All Australians are aware of our nation’s proud military past, in particular our service in WW1 and to be able to successfully uncover diggers whose identities remained a mystery for almost a century was not only exciting, but a great privilege.

“So to be able to help them identify previously unknown soldiers in a matter of hours was a thrill for us as an organisation and a testament to what NEC’s modern solutions can do, potentially in the national interest,” David says.

The first of these was of a Private Robert Deegan, a young soldier who was photographed by the Thuilliers in Vignacourt in 1916 and a year earlier at a recruitment station in country Victoria. The resemblance is said to be undeniable.

NEC’s team used its NeoFace Reveal Facial Recognition technology to identify soldiers with a matching threshold of more than 80%.