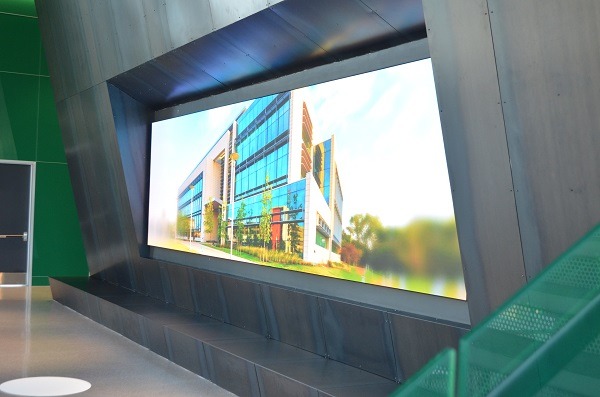 Students attending the new Engineering and Computer Science West building at the University of Texas in Dallas are being greeted by a striking lobby centrepiece – an ultra-wide, fine pixel pitch NanoLumens ENGAGE Series LED display.

The striking modern building is designed to inspire the next generation of engineers, with glass walls and open ceilings turning the building’s inner workings into educational opportunities.

The NanoLumens LED was not part of the initial design for the building but did turn out to be the ideal solution.

SKC Communications account executive Blake Overton says that the architecture had included a recessed wall and plans for a three-panel-high by six-panel-wide LCD video wall.

“But when we considered the difficulty of servicing a recessed video wall and the competitive pricing of NanoLumens LED displays that can be serviced from the front, it was clear LCD would not provide the best value or most reliable operation.”

The front serviceable design appealed to the integrators as it allowed for easy repair and was found to be the most creative, reliable and cost-effective solution.

Blake says: “The fact is if a piece of the NanoLumens display fails or malfunctions, we can repair or replace it in five minutes. On a rear-service, recessed LCD wall, it could take an entire day to complete the same maintenance.”

He adds that when they took into account service costs and warranty, NanoLumens proved to be a clear choice.

It is the second LED wall that UT Dallas has installed with the help of SKC but the technology is fast being adapted at campuses around the country and the world.

NanoLumens regional sales director Eric Seigler says: “As the number of installations grows, providing new possibilities including outdoor daytime viewing areas and custom shaped and curved displays, institutions will increasingly look to NanoLumens to engineer and deliver the best displays in the world. It’s especially fitting for our leading technology to adorn the entrance of a new engineering school where students have an innate appreciation for quality engineering and design.”