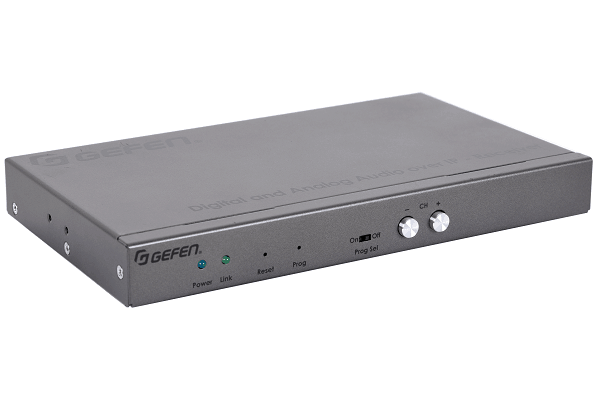 Nortek Security & Control (NSC), which is distributed by Amber Technology, has announced that its Gefen brand is now shipping six new models from the Gefen Gen 2.0 AV over IP product line.

Key enhancements provide integrators with in-demand solutions, including a new KM Emulation feature that facilitates real-time, simultaneous keyboard and mouse control of each source from all connected workstations. This eliminates the inherent limitations of earlier systems.

“The sender and receiver units are powered through a standard PoE-enabled IP network switch, which simplifies installation and placement. When used in conjunction with the EXT-CU-LAN Matrix Controller, system configuration is automated and very quick. Its Mass-Firmware-Update (MFU) feature keeps the entire system up-to-date without the need to access and upgrade each unit separately,” says Jason.

The sender units (except DisplayPort) feature a video output for local monitoring of the source. USB, RS-232 two-way IR and audio can be routed independently between any sender and receiver unit, allowing end users to control any of the sources and the displays within their network.

The new digital and analogue Audio over IP units allow integrators to add audio-only nodes to an installation. Each receiver can play back audio from any of the Gefen AV over IP sender units, including audio de-embedded from HDMI inputs.

All KVM and AV receivers feature a built-in scaler to help optimise the image on a variety of displays and viewing environments. They also include a powerful video wall controller that accommodates any screen configuration up to 16×16.

Digital and analogue audio break-out on HDMI, DVI and DisplayPort receivers allow audio that is embedded into the video to be sent to a separate audio system, enhancing the impact of presentations in large venues. HDMI models pass 7.1 channels of High Bit Rate (HBR) lossless and LPCM digital audio from source to display.

A built-in two-port gigabit switch on each receiver allows the daisy-chaining of additional receivers or other IP-enabled devices. This extends signal range far beyond the limits of a point-to-point video distribution system. The sender and receiver can also be used as extenders in a one-to-one system or as nodes in a virtual matrix environment where any source can be routed to any or all displays. This supports up to 39,900 senders and a combination of just over 65,000 senders and receivers.

“Each product in the new Gen 2.0 AV over IP line provides systems integrators with scalable, high performance routing and distribution that set new standards for performance and reliability,” says Jason.