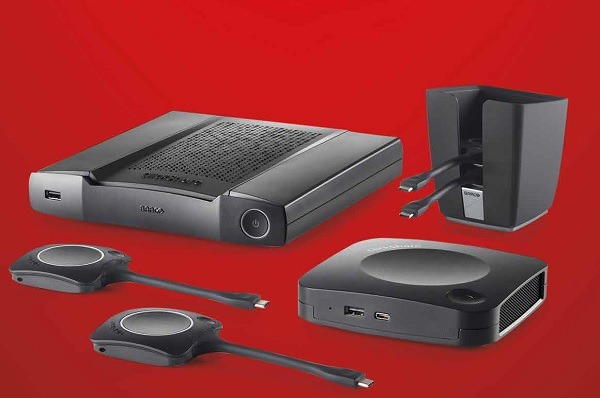 As ‘Zooming’ becomes the done thing, Barco aims to enable seamless connection and collaboration with its new solution. Stephen Dawson tried it out.

Late last year we had a close look at Barco’s ClickShare CSE-200+ Wireless Presentation System. This impressive gadget included a base station to which two computers – using the included dongles – could attach in a second, along with apps on iOS and Android phones. The emphasis was on ease of use, and that it delivered.

I am writing at a moment when COVID-19-response restrictions are, finally, being somewhat eased. Since I work isolated anyway, they’ve been having a minimal impact on me, except that instead of flying to other cities for product briefings and launches, I’ve been Zooming into virtual events. Meanwhile, a couple of my daughters have been working real jobs from home, consulting when required via Zoom or Skype or whatever. Barco would be the first to say – indeed it does say in its promotional video – that all that’s fine when it’s just you Zooming (I’ll use this as a generic term for now) with others. But what if there are several people at your end? You can huddle together to get into the field of a PC’s webcam. That can be uncomfortable and may feel unsafe in a time of infection.

The ClickShare CX-50 is the solution here. In brief, out of the box it can:

When video conferencing, the people you’re speaking to would see the wider field capturing all the people in your meeting room. You’d see,well, just one or two of them on their computer’s webcam. Unless they were also using something like the ClickShare CX-50, in which case you’d see a group scene from the other end.

The ClickShare CX-50 actually looks identical to the ClickShare CSE-200+, insofar as memory and web photos serve. It’s a low slab of electronics, around 200mm square and less than 40mm tall. On the front is a prominent push-button that looks like it’s for on/standby (it isn’t, really) and a USB socket. At the back are a couple more USB-A (2.0) sockets, plus a USB Type-C. There’s a HDMI out, a HDMI in, analogue and optical digital audio out and Ethernet.

Also supplied with the ClickShare CX-50 are two “buttons”. These are the dongles that plug into Windows or Mac computers. They are small squares, slightly under 60mm on a side, with 100mm long tails. Those are terminated by USB Type-C plugs which are, of course, for plugging into a computer. Both Windows (8 and higher) and Macs (macOS 10.13 and higher) are supported. You will also be able to use the system with direct communications from Android phones and tablets (v.9 and higher) and iPhones/iPads (iOS 12 and higher), but according to the Clickshare website, this is a coming feature, as is Google Cast and Miracast, so I didn’t test those. However I did use both the iOS and Android apps with the ClickShare CSE-200+ and they worked well.

It’s hard to see how setting up the ClickShare CX-50 could be any easier, at least with Windows computers. Nor how using it could be any easier. You plug the main unit into the HDMI input of the main display panel. You plug the webcam into one of the USB ports on the back. You plug the buttons into two computers. The button identifies itself to a computer as a CD drive with around 32MB of content. There is a small ClickShare application – both Windows and Mac versions. The Windows one runs automatically and installs ClickShare on your computer.

It’s not quite as easy as that with a Mac. You have to drag in the software, then you have to grant permission for the app to mirror the screen, and when I did that the app announced that it had to quit to allow that to happen. But when I restarted the app, everything worked fine.

I found it took two or three minutes for each computer to fully set itself up the first time. Thereafter, plugging in the button gave pretty much instant access.

The buttons connect wirelessly to the main ClickShare unit, mirroring the screens of the computers into which they are plugged. There is no pairing involved since they are pre-paired. Neither the buttons nor the main unit connect to your own Wi-Fi. You connect the main unit to Ethernet if you want to access its internal settings or use your own network for communicating with it. I just kept things simple, though, using the basic functionality of the system.

To connect, you just press the button. In less than a second, the screen of that computer is mirrored to the monitor, filling the screen as best it can. I used a 16:9 UltraHD TV. The ClickShare unit outputs UltraHD if the monitor or TV can handle it. When I was using the system with my Microsoft Surface Pro, its 3:2 display was resized to vertically fill the TV screen, leaving black space to the left and right. I also used a Mac Mini and a HP Windows 10 notebook. They both have 16:9 displays, so they filled the TV’s screen.

When one screen is up on the TV, you press the button on another computer and the first display shrinks down and to the left until it only occupies the left half of the screen, with black bars at top and bottom. In the case of the Surface Pro, it used the full half-width of the screen and occupied a bit more vertical space. The new computer’s display then flashes up on the right of the TV.

Got them the wrong way around? Tap the button for the left-displayed one and it switches off. The right one expands to fill the whole screen. Then tap the same button again and it will appear on the right. Because connection is so swift and certain, I felt no hesitation to doing this.

Each button has a smaller button at its corner. This is simply a pause button. Press it and that computer’s display, as shown on the TV, will freeze at whatever was showing at that point. You can change apps or whatever before pressing it again to resume a live display.

The display on the TV was crisp and clear, especially with the 1080p computers. It was a touch softer with the Surface Pro’s display, which is an odd resolution, but still perfectly readable.

The app on the computer places a thin red marker on the right side of the screen. Hover over that and a little control box for the ClickShare functionality pops out. You can pause the display there as well, or select “Share”, which lets you replace the mirrored screen with a particular window. Useful for highlighting a document, for example. Or your choice of communications program.

Much of that’s similar to the ClickShare CSE-200+. What the ClickShare CX-50 brings is the ability to share peripherals back with a connected computer. In this case, while you need a connection, the computer using the peripherals doesn’t need to be sending its screen, although you’ll probably want it to. I was supplied a Logitech Meetup room camera and speaker system for testing the ClickShare unit. I placed it at the base of the TV, plugged into the ClickShare CX-50. I could then select the Logitech camera on any imaging app on any of the computers – only one at a time. I generally use Photobooth on a Mac and Camera on a Windows computer first off, just to make sure everything works. It did.

Then I used Zoom and Skype to make a few contacts. In each case, I had the computer running the communications program mirroring its screen to fill the whole of the TV, and the video window of the communications program maximised on the computer. The Logitech camera can encompass a room or zoom in on an individual, so it was easy to frame the TV image for however many participants were in the room. Audio was captured by the Logitech’s beam-forming microphone array and played back through its surprisingly competent speaker system.

All this worked extremely well. But there was one small drawback that may be troublesome for some: latency. When watching the video window on the computer, there was about half a second of lag between action and it appearing on the screen – as opposed to an instant response when I plugged the Logitech Meetup directly into the computer. That would be the communications and processing time between ClickShare unit and button. When watching the video on TV, that increased to about a second in lag. (Actually, as closely as I could work out, about 0.9 seconds.) That’s because the image is then sent back from the computer – again, processing and communication time. For conferences and such, I don’t see it as a problem. However things like sharing musical performances and other things where sync is important, this wouldn’t work too well.

I was also supplied a touch screen to see how it worked with this unit. So for a while I used it as the monitor instead of my TV and plugged its USB connection into the CX-50. Then, whenever one (Windows) computer was connected – only one, mind you – I could control that computer from the touch screen. Although, again, there was a bit of lag that made things a touch uncertain. I tried a keyboard/trackpad combo in a USB port, but that didn’t work.

The fact is, though, that the ClickShare CX-50 not only does a solid job on sharing peripherals with your computer’s communications package, and your computers with a large display, it does it with no fuss and perfect reliability.

A smart home for independent living

Making the transition from residential to commercial ...