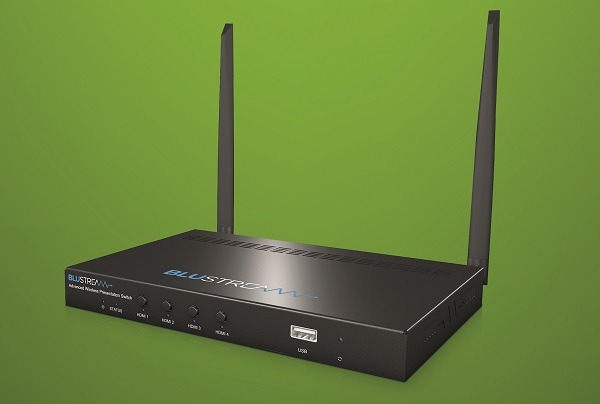 In the current day and age, the meeting room is a critical part of almost every business. It’s where important decisions are made on a daily basis; that’s why it’s so frustrating and sometimes daunting when the technology that runs your meeting room fails you.

It’s either too complicated, too unreliable, or on the other hand, it’s too simple to achieve the results you wanted. This is where the AMF41W steps in, Blustream’s brand new advanced but easy to use 4K presentation switcher.

The AMF41W comes in a nicely packaged box, containing the presentation switcher itself, a 12 volt 2 amp power supply, a 4-pin phoenix connector, two antennas, a mounting kit and a handy quick reference guide.

Taking a closer look at the AMF41W, it’s a compact little unit weighing in at slightly under 1.5 kg, measuring 215mm across the width, 141mm in depth, and only 25mm in total height (not including the antennas) which means you can place the AMF41W in a variety of different locations, depending on your meeting room space, using the included mounting kit. But bear in mind, you will most likely want to keep it out in the open and in the line of sight of users to minimise any WiFi issues.

We then have four input selection LEDs and four input selection buttons – these buttons allow the user to switch between the four HDMI inputs on the back of the unit. A short press is required to either select or deselect that source as being displayed on the attached TV or projector in conjunction with any other currently selected sources, or a long press to view that selected source only in full screen on the attached display – the associated LEDs will illuminate when a video source is currently selected and being displayed, or will flash every two seconds if a valid video source is available but not currently displayed.

Next is a USB port which is reserved for future use, then we have the good old fashion reset button for use in emergency cases.

Switching to the back of the unit, on either end of the device we have the WiFi antenna connection points, which are just the standard screw in type; over on the left, we have the power port for connecting the power supply. We then have the four HDMI inputs for source connections, followed by the single HDMI output for connecting to a TV or projector, and a standard 3.5mm stereo analogue audio output to connect to any external audio equipment or amplifiers.

Moving along, we have the LAN port which also features PoE and allows the unit to be connected to an existing network for control and access to the units Web GUI (more on this later) and finally we have an RS232 port 4-pin Phoenix connector for control of local source or display devices.

Setup and configuration of the unit is pretty straight forward: you have two options of gaining access to the Web GUI, and that is either by connecting to the AMF41W’s own WiFi hotspot, or connecting to the same local area network that the AMF41W is connected to.

The AMF41W can be set up in a number of ways depending on your usage requirements. A few examples include: standalone/BYOD switcher mode – this mode utilises the AMF41W’s own WiFi hotspot and four HDMI inputs for source selection. Users will be able to connect BYOD devices via Miracast and Airplay while still allowing these devices to have access to an internet connection.

The Web GUI is clean, easy to follow, and not overly complicated. The AMF41W has a guest control page that allows anyone to connect to the unit and control the on-screen layout as well as control the currently displayed sources on the connected TV or projector. The guest control option can be disabled via the admin menu.

The layout menu allows the control to select from five pre-defined templates, allowing for up to seven on-screen display sources at once, depending on which layout is chosen. The controller can then click and drag each source to its desired location.

From here we have the admin login – after entering the correct credentials the nitty gritty parts of the AMF41W settings and configuration are unlocked, and the first options available to adjust are video input and output settings. On the input side we have a function that allows the user to name or label each individual HDMI input, allowing a degree of customisation when it comes to setting up your HDMI source devices.

Next we have the ability to select an EDID setting for each HDMI input, or we have the option to select a custom uploaded EDID setting. Next is video output settings – the first option is output resolution which can be set to a number of different resolutions via the scaler settings, the next option to adjust is the analogue audio output latency which allows the user to set a specific delay to the audio output to help combat any processing delays caused by the attached display.

Next is video layout presets – this screen allows the user to make a number of changes based on your setup requirements, the single view default source can be chosen here and is useful for when you have a permanent source connected to the unit. You can also set the Multiview default source presets layout on this screen.

Next is the RS-232/CEC settings page, I didn’t get to mess with these settings, but they should all be straightforward and look like your standard type of options that allow the user to adjust RS-232 communication settings with a display or source device.

Next is your network settings and, as expected, we have the usual suspects in here to adjust and play with: MAC address, DHCP/Static IP selection, IP address, Subnet Mask, Gateway and Telnet address and port. Then we have WiFi Configuration – allowing the unit’s hotspot to be enabled or disabled, WiFi band and channel to be selected, WiFi password to be set, etc.

Next on the list is the maintenance section, which will show a simple status of the device’s HDMI inputs and outputs, device information (this shows firmware versions of the device itself), along with SSID and device name. The splash screen section allows a user to upload a custom wallpaper or welcome screen. Then we have the ability to upload new firmware as it becomes available and, finally, the trusty old ability to reboot, or factory reset the AMF41W.

On a side note, the unit is capable of being powered via PoE so that’s handy for installations using a PoE switch.

So in my specific scenario for testing I had the AMF41W’s HDMI-out connected to my cheap LCD TV and the picture still looked great at 1080p. On the HDMI-in I had a media player, my trusty old XBox360, my son’s Switch, and then the family Blu-ray player.

All of these devices worked seamlessly with the AMF41W; I could switch between each one, going from full screen and back to four on screen or less at a time without hassle, either by using the buttons on the front panel or controlling via the UI – switching was simple and fast.

I tested the unit’s ability to host BYOD devices in both hotspot mode and while connected to my house LAN using my router as the access point. Both modes worked perfectly, and I was able to cast my older Samsung Galaxy S7 Android phone to the unit without hassle which is amazing as I’ve had issues with another popular wireless presentation device in the past with Mira casting.

I also tested Airplay from a MAC which was also a pleasant experience. All up, I pushed the AMF41W to its limit of seven devices on screen at once and it didn’t skip a beat, it switched between sources as expected, and was fast and responsive.

All in all, the AMF41W is a great WiFi presentation device. It was simple to use, fast and responsive, easy to configure, and navigating and understanding the UI was a breeze.

I’m sure the AMF41W is going to make a dent in the WiFi presentation device market and give some of the bigger named products a run for their money. Given that this is a big market, that is only growing larger, I think that’s a good thing.