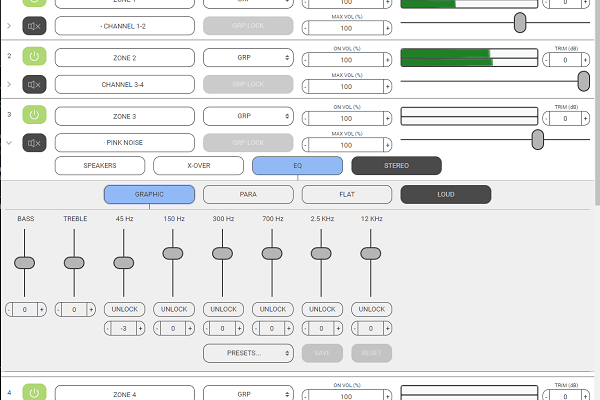 AudioControl, distributed by Synergy Audio Visual in Australia, has introduced the Director 2.0 firmware, adding features and an easier-to-navigate graphical user interface to its Director Series and RS Series of DSP amplifiers.

The new firmware also gives users a range of functionality and improves efficiency for integrators, letting them deliver the best entertainment systems for every client.

Its new UI gives integrators a clean look, all on a single page while also being a responsive web page, making it easier to view on a variety of devices and screen sizes from phones and tablets to computers. It’s compatible with Apple and PC computer platforms as well as iOS and Android devices.

One of the bigger features is the SDS (signal detecting switching) priority input, letting users seamlessly interact with the popular smart doorbell devices, command prompts from voice assistants and other devices while also muting entertainment content until the event has passed.

This feature represents an opportunity for integrators to provide added value with useful smart home functionality when installing a multi-zone entertainment system.

Alongside the easier GUI, AudioControl has added six additional parametric EQs for enhanced system tuning capabilities, channel metering for visual confirmation of signal levels and a touch-sensitive webpage. It can now be completely configured from a phone, tablet or other touch-enabled device.

The Director 2.0 firmware will be available for all current Director and RS Series Models in August 2020 and will specifically upgrade the M6800, M6400, M4800, M4840, D2800, D4600 and RS Series models. In addition, dealers can update current models by downloading this firmware from the AudioControl website.