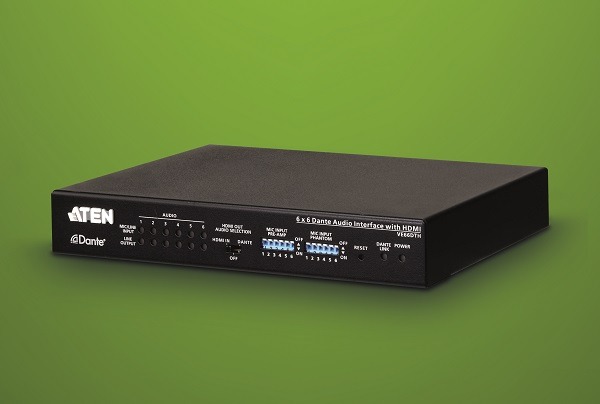 Distributing AV over a large space and across many devices has its challenges. Stephen Dawson takes a look at one Dante-equipped solution from ATEN that fits the bill.

In most cases, one is going to have audio follow a straightforward path: source to amplifier to speaker. But what if you have multiple sources and multiple output devices – often very far apart – and want to have the flexibility to connect them together any way you like? That’s where the ATEN VE66DTHB 6 x 6 Dante Audio Interface with HDMI comes in.

ATEN is a Taiwanese firm, well known for various computer hardware peripherals and professional presentation switches and controllers. You can’t really get anything fitting into its area of expertise more than the VE66DTH. In short, this device uses the Dante audio over Ethernet system to route several channels of audio from here to there, and from there to here, in a flexible, low latency way using the installed network.

Note: that’s a wired, gigabit network. The system does not recommend Wi-Fi networks. In light of that, I didn’t look into that possibility.

Dante is a widely used protocol for this kind of thing. I think we can be forgiven for a touch of national pride here. Dante was developed by the Australian start-up Audinate back in 2006 and is one of the leading protocols in the field.

The ATEN VE66DTH 6 x 6 is a small unit, measuring just 17.5cm across, 15.5cm deep and less than 3cm tall. The power supply is a wall wart, but the unit can instead be powered by PoE – power over Ethernet – if you have that infrastructure installed.

DIP switches on the front panel for each channel select between line and microphone level, and phantom power on or off. A slide switch selects the source for the HDMI audio output. The video – UltraHD is supported – simply passes from input DMI to output HDMI unmolested. The slide switch can have the audio off for the HDMI out, or pass through the audio from the HDMI input, or feed selected audio from one of the system inputs into the HDMI output. A good collection of LEDs on the front advise as to status.

One Dante device is fairly useless. You need at least two, and you can have a lot more. You can route the signal from any connected Dante device to any output on a Dante device using the Dante Controller software. This is available for Windows and Mac, but not Android or iOS.

Sometimes there are perks in reviewing stuff. I must make this declaration: ATEN included with the two review units another box with five gloriously scrumptious Byron Bay Cookies. I fear my review may be coloured. I would encourage all product distributors to engage in similar kindnesses!

Also, upon looking into these products, I realised I’d have to bodge up some adaptor cables in order to conduct the review. The easiest way, I worked out with ATEN, was for me to buy some cables from Jaycar and cannibalise them for this job. ATEN agreed to reimburse me for the expense, seeing as how the cables would be useless for anything thereafter. They came to about $80.

I confess: Dante was utterly new to me. But I’m happy to say it’s surprisingly easy to master. Since I didn’t have any Dante-compatible equipment, I asked ATEN to send me two of the units. That way I could use one to transmit and one to receive. Indeed, perhaps each to do a bit of both.

Setting up the system was – with one wobble for me – fairly straightforward. The most time-consuming part was rigging up the connections using the chopped-up bits I’ve previously mentioned, attaching them to the supplied Euroblock plugs. I connected several of the newly created input and output RCA cables and the two XLR microphone cables, along with a HDMI connections to a Blu-ray player and a TV. And, of course, plugged both into my network. For most of my testing there was just a Netgear gigabit switch between them, but I did later take one of the units further afield, to a connection in my house (my office is out the back, connected via Ethernet) to make sure the connections worked at distance. They did.

Once they were plugged into the network, they each used two IP addresses. One was for the ATEN hardware, and one was for the Dante interface. The ATEN hardware one provided a web interface by which you can upgrade the firmware. As is often the case, my browser was reluctant to let me log onto the web interfaces of the units, proclaiming them to be unsafe, due to the lack of a valid SSL certificate. But there is a facility to upload an SSL certificate to each unit. If you’re doing an installation you may want to include purchase of the certificate. The firmware upgrade went smoothly.

The wobble I mentioned was with the Dante Controller software, which I used in the Windows version. I thought it would be convenient to use a notebook computer, so I installed it on a HP Elite notebook. The software seemingly worked fine, but it could not see either ATEN unit. After trying this, that and the other thing I resorted to installing the software on my desktop. There it worked perfectly. So, I tried a Microsoft Surface Pro (2017). It worked when it was connected to a Surface Dock and thus wired in via Ethernet. But it could not see the ATEN units when operating on WiFi. I note that the Dante people say that it doesn’t work over Wi-Fi, in terms of transferring audio data, but the Dante Controller software is supposed to. I never could get it to work with the HP computer, even with Ethernet.

The Dante Controller software is very extensive and allows all manner of tweaks and controls, including (apparently) selecting sampling rates of up to 192kHz. Remember, the ATEN units must incorporate analogue to digital converters, and then digital to analogue converters. I kept things simple, leaving the system on the default 48kHz sampling.

Since I had two ATEN units, I had to work out which was which. That is, which name in the software was for which piece of hardware. In the Dante Controller program, they were labelled ATEN plus the last few letters of the Dante (not ATEN) MAC address. The ATEN MAC is printed on the bottom of each unit, but not the Dante one. I just took a guess, with a fifty-fifty chance of getting it right. For once I did. But it would have been smarter to connect them one at a time, noting each one’s identification as I went.

The Dante Controller software shows a grid. When you want an input to play on an output, you just click in the intersection between them. The change takes place instantly, although the software takes a few seconds to show that the connection is complete.

You can have music flowing from an input on one device to an output on the other, while also sending audio back in the other direction. Or you can “broadcast”: have the signal from one input going to lots of outputs.

The LEDs on the front of each unit glowed amber when the relevant connection was delivering a signal.

The system worked smoothly. There weren’t any dropouts. The sound was good. Not quite as good as the source being plugged directly into the playback amplifier rather than running through the network, but the differences were subtle. The most obvious change was a little 50-hertz-plus-harmonics noise appearing from the speakers when I went very close to them and listened carefully. I later found that I had the source device’s volume down at fifty per cent. When I turned it up to full, and reduced the amplifier’s volume control to match the previous sound level the mains breakthrough was almost entirely inaudible at all sensible listening levels.

I probably shouldn’t have done this, since the figures necessarily seem poor compared to the high fidelity DACs and such that I normally measure, but since I did notice a little mains hum coming through some connected speakers, I figured it might be interesting to measure it. What I did was measure the frequency response, noise, and distortion of the system, with the test signal going to one of the ATEN units, then through my network – just the gigabit switch separated them – to the other unit, and then its analogue output going back to my test device. I used a 24-bit, 48kHz signal for the test. The frequency response was pretty solid, extending out to slightly above 21kHz with no droop before hitting a brick wall filter.

At the bass end there was a very slight reduction in output: down by 0.2dB at 20 hertz. The noise levels were fairly high, though. The measurement was -58.8dB A-weighted. Basically, that was due to 50 hertz mains breakthrough, along with lots and lots of harmonics. The noise floor under those spikes seemed to sit at around -100dB to -110dB. The 50 hertz component reached perhaps -43dB, the third harmonic -50dB, with all the others better than -62dB. That measurement fully explained what I heard.

Again, that was in a quiet room getting up quite close to a speaker. Normally, I heard no noise. I kind of feel that this seemingly mediocre noise measurement is actually almost miraculous, given the circuitous, packetized route the audio took to be measured.

The ATEN VE66DTH is a very useful implementation of the Dante audio interface. It’s versatile and, with a little forethought, quite easy to use.