Vacuum trenching and the NBN

As part of its commitment to causing as little disruption as possible during the construction phase of the National Broadband Network (NBN), NBN Co – the company established by the Australian Government to oversee the rollout and eventual operation of the network – is testing a number of installation techniques at the five first release sites.

Vacuum trenching is one such technique, recently trialled at Kiama Downs on the NSW South Coast, which sits alongside Brunswick in Melbourne, Townsville in Queensland, Armidale in New South Wales and Willunga in South Australia as one of the trial sites being used to validate network design and construction and installation techniques while testing the requirements of the NBN across a range of different geographies and climates.

As Australia’s largest ever infrastructure project, the NBN is an ambitious plan to deliver high-speed broadband to all Australians via a wholesale-only, open access, high-speed network. On completion, the NBN should provide broadband speeds of up to 100Mbps, up to 100 times faster than most Australians have ready access to today.

At ‘ground’ level it involves the laying of fibre optic cable to 93% of Australian homes, schools and businesses – with remaining areas to be connected via a combination of next-generation high speed wireless and satellite technologies.

Construction of the NBN involves building networks in public streets, as well as connecting individual premises to get them NBN ready. Public street works include all activities required to install optical fibre optic cables and related equipment, be it underground or overhead. Connections to individual premises includes the installation of optical fibre cable – again, either underground or overhead – from the street to the equipment fixed on the outside of each home. Each area will work off a number of fibre distribution hubs, all connected to one central RSP backhaul.

The vacuum trenching technique was used to dig each lead-in trench for the connection from the street to close to 200 homes in the Kiama Downs area. It involves the use of high pressure water blasting to loosen the ground. This mud is then sucked out with a vacuum.

This method has proven a useful tool in that it is a relatively quick process and does very little damage to lawns or pavings, explains NBN Co communications manager Rhonda Griffin.

“Vacuum excavation has the advantages of being less disruptive and in some situations a more cost effective option, especially when completing lead-in activities to a customer premises. Conditions need to be right, however, this means the ground must be soft and cannot contain too much aggregate.

“Technologies currently being used will be assessed to determine best practices with a view to becoming more productive through the recycling of water used during the vacuum process and the ‘fill’ removed from the site.” 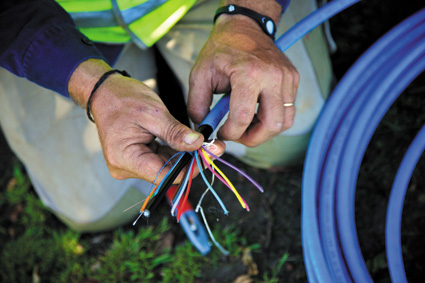 When it isn’t suitable to use vacuum excavation, a ‘grundomat’ underground boring pneumatic piercing tool is another option.

It is important to note that vacuum trenching is just one technique successfully trialled at the Kiama site, Rhonda adds.

“There have been a number of methods used at Kiama Downs as part of its status as a trial site. We employ principal contractors at each site and in combination with other methods, vacuum excavation has been used. ‘Open cut’ is another method used, using a mini excavator or a chain trencher. There are a wide variety of small machines available and the best options are chosen on the basis of productivity, impact to streetscape, etc.

“The methods used at each site depend on the soil and rock conditions of a resident’s front yard. For example, when it isn’t suitable to use vacuum excavation, a ‘grundomat’ underground boring pneumatic piercing tool may be used. With this method, there is no need to open cut the ground as the grundomat cuts its way through the ground by displacing soil.”

Behind the trial work undertaken at Kiama Downs is Transfield Services, the principal contractor employed for the area, and a leading global provider of operations, maintenance and asset and project management services. The company was selected by NBN Co as a NBN designer and completed the blueprint for the Minnamurra/Kiama Downs area. Bruce James, CEO of Transfield Australia and New Zealand says, “It is exciting to partner with NBN Co on this nation building project that will deliver high speed broadband to all Australians. Transfield Services has extensive expertise in the end-to-end delivery of substantial infrastructure assets and specific expertise in the design, construction and maintenance of telecommunications network assets. Our work will test network and construction methods in readiness for the roll out of this important project.”

Work at Kiama is close to completion, with the next phase to involve local providers testing the network in conjunction with end users. It will be a similar story at test sites across the country.

“Fibre serving area modules (FSAM) and main construction has been completed within Minnamurra/Kiama Downs,” Rhonda says. “Transit is being built and handover between construction and ops will happen soon.”

Over its eight year rollout, the NBN is being promoted as a nation-building project that will stimulate the economy through its deployment and, once complete, by cementing our place in the global economy. Cabling manufacturers and installers are expected to benefit from the project through the generation of jobs. And as it continues to rollout across the nation, you can expect to see vacuum trenching used again, in combination with other techniques.

“Vacuum trenching has been successful and will continue to be used depending on the approach of the principal contractor assigned by NBN Co and the conditions of the ground,” Rhonda says.