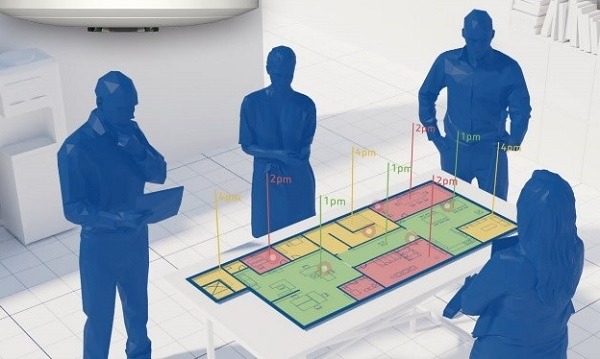 A new solution from Theben, which detects how many people are in a room where they are located, recently picked up the German Innovation Award and it is available in Australia now.

For decades, Theben’s classic presence detectors with passive infrared technology have controlled the lighting and indoor climate of many rooms in a sustainable and energy-efficient manner. They detect people accurately and reliably based on body heat and movements.

The pixel-based detection technology in thePixa KNX optical presence detectors opens up further applications with a great deal of added value and is truly innovative.

Using image analysis, the presence detector identifies changes in the situations that arise in the rooms being monitored and processes the associated information. thePixa can then detect how many moving objects are within the detection area and count them. The result is visually processed in the form of a heat map and can be called up, together with detailed occupancy statistics in the thePixa Plug app.

This information triggers a predefined action in the KNX building control system, such as starting up the ventilation system in a fully occupied meeting room. The area that is covered can be divided into different zones if required. This creates precise subdivisions in the detection area of up to 11 × 15.5 m, enabling precise lighting control in larger rooms and preventing false switching.

It is also possible to set up exclusion zones in which detected movements do not trigger any actions.

The visualisation of detected areas by means of the heat map offers building operators a great deal of added value: for example, product presentations in department stores can be optimised to show which products customers stop at most often and therefore show the greatest interest in.

Valuable information can also be obtained in office facilities: by identifying which workstations are used more or less often, it is possible to open up advantages such as efficient desk-sharing management. The often high installation costs that are incurred after conversion or room restructuring are completely eliminated, as new zones within the detection area can be easily created in the app.

For more information about thePixa KNX optical presence detector in Australia, visit www.theben.com.au or contact them on either sales@thebenpty.com.au or 08 8436 1163.