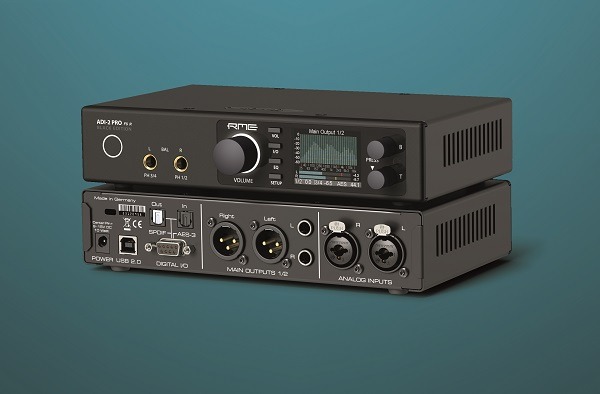 In need of a new audio convertor, Stephen Dawson hit upon this compact yet versatile offering that hits all the right notes for an avid audiophile.

This review is a little different to our usual fare, but it is one dear to my heart. The RME ADI-2 FS R Black Edition is a digital to analogue converter, an analogue to digital converter and a headphone amplifier. It’s in a compact box and available for a price that is perhaps daunting to many, but actually well within the norm for either an audiophile or an audio professional.

Confession: this review is of my own unit. I purchased it for my own reasons – for a modest discount from the distributor I should make plain.

RME is a German brand that specialises in handling the interface between music and computers. It has a wide range of products. Until a couple of years ago, I wasn’t really aware of it.

Then the Focusrite Forte analogue to digital converter I’d been using for my measurements went very strange. I can’t be certain that it had broken, but neither could I rely on it. It was several years old and had been discontinued, so I went off to my local pro-audio shop for a replacement. I grabbed a Focusrite Scarlett two channel interface, but a couple of measurements showed that its noise performance was markedly below that of the Forte.

So I took it back and wondered what they had that was better. That’s when RME came up. What about the RME Babyface Pro? Dumb name, and a price something like six times that of the Scarlett, but very impressive specs. I went with that. Suddenly, I found myself measuring signal to noise ratios of better than 110dBA.

Now that I knew the name RME, the RME ADI-2 PRO FS gradually intruded into my consciousness. Like the other stuff I’d been using, the Babyface Pro was limited to 192kHz sampling, But the ADI-2 PRO FS went all the way up to 768kHz sampling. As time went by, the unit was gradually upgraded to its current configuration, the RME ADI-2 PRO FS R Black Edition. The BE addition included upgraded AKM DAC chips, now up to the AK4493. That yields a few decibels more signal to noise even than the AK4490 used in the previous model.

So, what does it do?

I guess the primary role, and the one I wanted, is to convert analogue audio to digital at a very high standard, and equally to convert digital back to analogue to a similarly high standard. RME calls it “Ultra-Fidelity”.

For this purpose it is well equipped with both analogue and digital inputs and outputs. There is of course a USB Type-B socket on the back for plugging into a computer. When you do so, the whole unit is in “USB mode”. All operative inputs are fed through the DAC to the computer. (There are two further options for controlling which inputs are operative.) And any audio played back on the computer is available to whichever outputs you want.

If the unit is not connected to a computer, it can operate as a standalone DAC, a digital signal converter to your preferred format, a headphone amplifier or monitoring device. Basically, any connected inputs can be sent to any connected outputs, and in most cases you can use the built-in DSP to adjust EQ and such.

All those connections are on the back panel. On the front are two single-ended 6.35mm headphone outputs. One of them is fed with the same signal as the main analogue outputs – suitably boosted for headphone use, of course – while the other is independent, and is thus the main headphone output. If you wish to use balanced headphones, a setting enables both outputs to be used, feeding the left channel to one and the right to the other. You’ll probably need a special cable to adapt a balanced headphone connector – 4.4mm TRRRS, 2.5mm TRRS, 4-pin XLR or 2 x 3-pin XLR – to 2 x 6.35mm TRS. I’ve googled a few times and haven’t found one available.

Fact is, balanced mode is something that will hardly ever be used – I’m assured by a founder of another high-end German pro-audio firm that audio engineers don’t use balanced headphone connection. But the fact that it’s there kind of demonstrates the flexibility of the signal routing within the unit.

All the control is via three turn-and-press knobs, and four press buttons on the front panel, plus the included IR remote control. There are a lot of menus to navigate, all of which are shown on the 52mm front panel colour display.

I used the unit with Windows 10. I didn’t use it really in Pre-amp mode. There are plenty of cheaper pre-amp solutions, but it’s useful to have the versatility.

The unit works with RME’s MadiFace drivers, not its FireFace drivers. As such RME’s TotalMix FX panel doesn’t work (directly) with the RME ADI-2 PRO FS R BE. By default, the unit is locked into two channel mode when it’s plugged into a computer: the analogue channels in only. But within the menu you can switch it to six channel input mode. Channels 1 and 2 are analogue in, 3 and 4 are AES/EBU in, 5 and 6 are S/PDIF. In the settings you choose between optical and coaxial for which S/PDIF you want to use. If you’re using optical, two ADAT channels are also supported.

Note, though, that in multichannel input mode, the unit only supports up to 192kHz sample rates, not the full 768kHz. Which is why it defaults to two channels. Depending on mode you can change the sampling rate. Indeed, the unit includes sample rate conversion so you can change from the incoming to your own if you like. But for recording to computer from analogue you need to set the sample rate that you want. You can do that through the menus, but I found it easier to simply open up the MadiFace driver on the connected computer and choose a sample rate from the drop down list. The change is reflected in the sample rate shown on the unit’s display.

There are several more use models. For example, you can just use the unit to decode, say, optical digital audio to analogue, or use it as a headphone amp. There’s even a digital passthrough mode – optical to optical, AES/EBU to AES/EBU – except that the signal is actually received, then rebuilt with RME’s Femto clock controlling proceedings. The built-in DSP shows the signal on the screen so you can monitor it in one or other analogue formats.

Speaking of the screen. This has lots of display modes, but typically you’ll just leave it in the default during playback, where it shows a 15-band live spectrum display and instantaneous levels. The latter include overload indicators, so you can adjust the signal level.

Signals in, signals out

Those are also the balanced line output levels.

The headphone outputs are monsters. I confirmed the following: more than 1.1 watts into a 16-ohm load, and more than 350mW into a 300-ohm load. They actually switch internally from low power to high power mode as you advance the volume in order to optimise signal to noise ratio. According to RME’s figures, their output peaks at 1.5 watts into 32-ohm loads. Since the output curve in the manual matched my measurements, I wouldn’t dispute this figure.

The range of adjustments and functions is daunting. The 100-page English-language menu is an interesting mixture of nicely literate, extremely detailed, and organisationally confused. Or perhaps that was just me and an inevitability with one device that’s way more than an electronic Swiss army knife. There are interdependencies and lockouts that are initially baffling, but as you think about them you realise the sound reasoning behind them.

One thing that had me puzzled for quite a while – and I sorted out with the help of the distributor – was how to change between two-channel and multichannel mode. I went to the relevant menu option and it was locked out. It turned out that you can’t change this while it’s connected via USB to a computer. Pulling that plug unlocked the item, I could switch it and plug it back in. I suspect that changing it while plugged in would probably have upset any software on the computer.

When I did switch to multichannel mode, I could fire up Reaper, the Digital Audio Workstation that I use, and in moments assigned all six inputs to tracks. I tested it with high resolution audio output from a DVD player’s coaxial digital audio output. Bit-perfect capture.

Amongst the many, many features, are good old-fashioned tone controls, and even an old-fashioned loudness curve. Or you can apply a parametric EQ, and save a number of pre-sets, invert phase, engage several levels of crossfeed between left and right on the headphones. And so on.

As for me, I’ve been measuring stuff and solving problems with the RME ADI-2 PRO FS R Black Edition.

For example, earlier in the year I went scouring the Internet trying to find a 768kHz PCM file of some kind I could use as a test track. There was, apparently, only one and it proved impossible for me to complete a purchase from the Japanese website. So I used the RME ADI-2 PRO FS R BE. I plugged a microphone into a mixer – the ADI-2 PRO does not have a microphone preamplifier – the mixer into the RME, and the RME into the computer. I set the sampling frequency to 768kHz and recorded a short verbal message using Reaper. And thus I had a 768kHz, 24-bit WAV test file.

My main use has been measuring and analysing. With the extremely wide bandwidth available in the ADC, I’ve been able to analyse the performance of consumer DACs, seeing in detail what they’re doing in the ultrasonic domain.

And when I measure noise performance, I am now getting results from other DACs, like the AudioQuest DragonFly Red, of around -118dBA with 24-bit sound. With my older Focusrite Forte ADC, the best measurement I managed was -109.5dB.