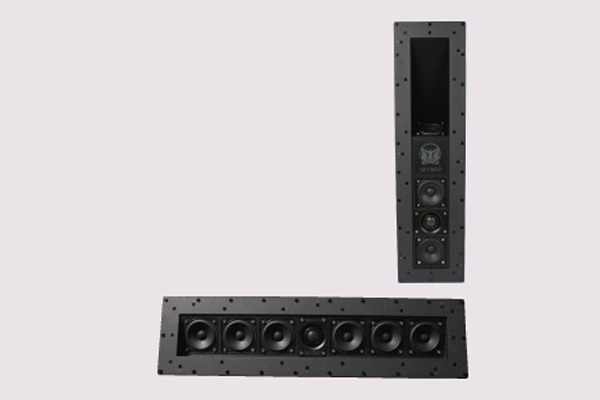 How many holes should you cut into the walls and ceiling of a room to install speakers for a full surround sound system? TDG Audio reckons that with its Skybar system you can get away with three.

The Skybar speakers are versatile installation speakers. They come in two varieties – dubbed Skybar LCR and Skybar Satellite – although both kinds fit in the same size hole and present the same kind of face to the world, thanks to their paintable white grilles.

They are rectangular units, made with a steel frame and a sturdy MDF enclosure. The MDF means that they are relatively independent of their environment since they have a fixed internal volume and known rigid structure. The enclosures are sealed.

Each requires a hole measuring 673mm by 152mm. They should fit into just about any wall cavity since they require only 89mm of depth. Each is secured by six swing-out arms which are tightened or loosened from the front.

Wiring is via sturdy spring clips, each with a hole large enough (and with sufficient clearance around it) to accommodate banana plugs, and just about any feasible wire.

Underneath the grilles, each of which is very well secured by 22 magnets, are the driver components. It is these which largely distinguish the Skybar LCR and the Skybar Satellite speakers from each other.

Let’s start with the LCR. This has a row of seven drivers. At the centre is a 25mm titanium dome tweeter. Like the other drivers, it is set into a baffle that’s tilted at 15° away from true. The point of this is that when it is installed in the ceiling, the drivers can fire more towards the listening area. The tweeter can itself be swivelled to fire more directly at any chosen target.

On either side of the tweeter is a 76mm full range driver. Well, full range if you don’t count deep bass. The description of the driver as full range suggests that no crossover has been used. TDG Audio is fairly light on technical specifications, so I’m uncertain about that.

There drivers are all fed by a pair of speaker terminals intended to be wired to the centre channel. To the right of this assembly are two more of the 76mm drivers, and another pair are to the left of the centre group. One of these pairs is connected to the left channel terminals, the other to the right. And so you have your LCR – left, centre, right.

But there’s a touch more flexibility here; there’s an additional pair of wiring terminals and an associated switch. Flick the switch and all the drivers are fed by just that one pair of terminals. They become standalone mono speakers. I could imagine one of these being installed either side of a large projection screen or TV, with all seven drivers handling the left or right channels.

The Skybar Satellite speakers look the same with the grilles on and use the same 25mm tweeter and 76mm full range drivers, but in a very different arrangement.

There are three drivers – 76mm, then tweeter, then 76mm – in a row at one end. On this speaker the baffle is not canted, but the tweeter can still be swivelled. These are connected to a pair of terminals intended principally for the surround channels.

There’s only one extra driver in each of these speakers: a 76mm full range. But this one is in an unusual cut-out in the enclosure, so it’s firing at an angle of about 75° to that of the other three drivers. The angled slot along which it fires has felt-like cloth on its largest area. This is to reduce high frequency reflections out into the room. The idea is that this driver is more directional, shooting its output at another room surface from which it will be reflected into the room.

That makes it very flexible. Install them as surround speakers in the ceiling near the back of the room and point the angled speaker at the back wall for surround rear duty. Or install them vertically in the front or rear walls and use the angled speaker for height. There’s no mention of them being ‘Dolby Atmos Enabled’, but they are similar in concept and could be pressed into service in that function.

Like the Skybar LCR, there’s another set of terminals and a switch so that all drivers can be fed by one signal.

I used a Yamaha Aventage RX-A3080 home theatre receiver with these speakers. With some caution, I might add, since TDG Audio recommends use with an amplifier rated at 5W to 50W, and the Yammie is rated at 150W per channel.

I wired the Skybar Satellite speakers in their two-directional mode, with the angled speakers pointed towards the rear wall so that they could act as rear surround. My back wall is fairly reflective, acoustically, without any cut outs or other problematic elements. I put the Skybar LCR at the front of the room facing forwards, as though it were a soundbar, rather than in the ceiling.

I used the auto setup function of the receiver. That included EQ, since I figure nobody’s going to use these loudspeakers raw, so to speak. They will always be coupled with a modern home theatre receiver. Clearly they are not designed to do bass, so I used my long-time friend, a Paradigm Servo-15 subwoofer to handle bass duties. I did all my listening with the sub since, again, nobody’s going to use them sub-free.

The receiver set all the speakers to small, with a crossover at 120Hz, except for front centre, which it put at 110Hz… which shows you really do need a sub.

I adjusted the position of that speaker, making sure it was directly parallel to the side wall, and redid the calibration. The result was the same. Later I manually increased that distance to match the right channel.

Clearly these speakers are managing to ‘throw’ the sound towards the rear wall, but of course it’s imperfect.

One final note on calibration: I was expecting there to be a marked difference in the sounds of tones between the channels with tweeters and those without. Yes, those with the tweeters were a touch brighter, but only slightly. Overall, the tone from all channels was quite similar. Checking the Yamaha’s EQ settings afterwards, the receiver gave several decibels of boost to the area around 8kHz for those channels without tweeters, and reduced that area by several decibels for those with tweeters.

There are 76mm drivers – three inches in the old language – and 76mm drivers. Clearly TDG Audio has used extremely high-quality ones in this system. With my subwoofer handling the sub-120Hz content, very high home theatre and music volume levels were available without noticeable distortion.

As it happens, after I’d wired up the speakers I switched on the receiver to start the calibration process and was startled. Last time I’d used the receiver I’d been playing some very loud music, using it as a digital media renderer. It was set to 0dB output – a good 10dB higher than my usual listening level – and after a few seconds this music started blasting out.

As I’m writing this section, I’m playing surround music at an indicated -7.5dB, and it is wonderfully room filling. That surprising blast of music was almost room-shattering, yet the speakers seemed to cope perfectly well.

I ran through favourite surround sound scenes of several movies, including Heat (of course!) The impact of the gunshots in the street battle scene we just about as impressive as my normal, much larger speakers. Of course, the sub did the grunt work, but the impact still relies on the mids and treble being in sync and able to respond well to impulses.

To test out the surround coherence, I used an old walk-around-the-room test from DVD Video Essentials. This exhibited some small tonal changes across the front of the sound stage. Oddly, the treble seemed a touch muted from the centre channel position, as though the receiver had over-compensated. The movement across the back of the room was smooth and precise. But there was bit of a jump down the sides, principally because the left and right channels are not very far apart. Indeed, just under 410mm by my tape measure.

That inevitably narrowed the width of stereo music as well. There simply was not much stereo spread, even compared to a conventional sound bar. By way of comparison, my left and right speakers are nearly 2.4m apart.

You might have thought that stereo music would suffer from the lack of specialised tweeters, but in fact the cymbals on music were delivered with surprising fullness and precision. Indeed, I went right up to the Skybar LCR and put my ear against the tweeter, while music was playing in stereo mode, just to make sure it wasn’t being used. It wasn’t.

The TDG Audio Skybar speaker system is a highly flexible system of installation speakers with fairly predictable performance. And they let you get away with fewer holes cut into walls and ceiling.