Need to hide a sub in the ceiling? Stephen Dawson says Redback’s latest offering may be the answer.

I have reviewed many installation speakers in these pages. Most of them are designed for the ceiling. I’ve also reviewed plenty of subwoofers, some of them also made for installation. But the Redback C 1065 is the first subwoofer I’ve reviewed that is intended for in-ceiling installation.

Imagine a regular ceiling speaker. Now imagine the same, but bigger. You are now imagining the Redback C 1065 subwoofer. From the front (or from underneath, once it has been installed) there’s a heavy duty, high-impact plastic white ring 363mm in diameter. It’s clean. All the workings are hidden underneath the white metal grille, which is a little smaller at 313mm in diameter. Both the outer ring and grille are paintable.

With the grille removed you see a black, 250mm diameter woofer, slightly off -centre within the ring. It’s set in slightly so there’s no danger the cone or its rubber roll surround would come into contact with the grille. There are six Phillips head screws near the inside of the ring. These attach to swing-out lugs which are used to secure the subwoofer to a ceiling panel. Redback calls this its ‘Fast-Fix Flip Lock System’.

The reason that the driver is off -centre is to make room for two slots and one dial control. One of the slots acts as a bass reflex tube. It opens at the bottom into
the enclosure. The other is identical but closed, so it’s unclear why it’s there.

The dial control is to set input mode because this is a passive subwoofer, not an active one. It has no built-in amplifier. It has five positions. One is off . Three are for different 100V transformer taps: 60W, 120W and 240W. And one is for direct wiring for use with a conventional amplifier. In that mode the driver is rated at 4OHM nominal impedance, and capable of handling up to 240W of power.

The back of the unit is entirely covered by a deep, sturdy metal can. That protects the driver from dust and dirt in the ceiling space and provides a fixed volume of internal air to allow predictable tuning. The specified mounting depth, from the front of the ceiling panel, is 330mm. That’s sufficient to allow the cable to come out of the rear hole. There’s a cable clamp at the exit. 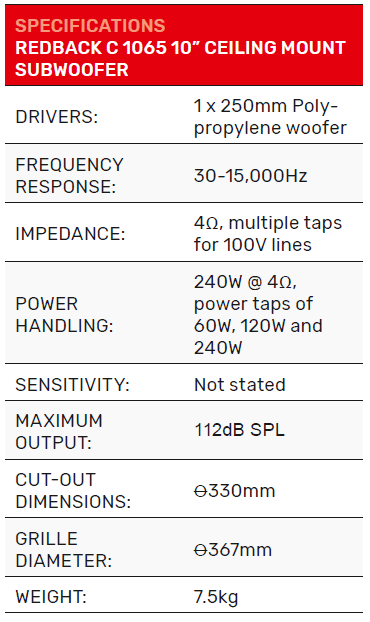 The speaker connection is via Euroblock. This resides in a recess under a metal plate, so it’s quite well  protected from the ceiling environment.

Redback specifies the maximum output of the subwoofer at 112dB and the frequency response at 30 to 15,000Hz. Of course, the last thing you want is for the sub to be producing significant levels of treble. It’d be best to use it with a low pass filter in line such as that provided on the subwoofer output of a home theatre receiver.

The company notes say: “Due to the weight of the speaker, we recommend the unit be tethered to the  ceiling with a safety chain”. A mounting point on the back of the can is provided. I’d certainly agree. The specification sheet said that the unit weighs 7.5kg. In fact, at least according to my scales, it weighs 9.05kg,
9.4kg with the grille. The manual also mentions the use of ‘cross support’ when installed with ceiling tiles.  again, I’d agree. Included in the box was a metal ring with lugs to slide over ceiling tile rails. That might be sufficient to provide that support, but it would still be wise to have most of the weight carried by the tether.

Again I wimped out. I did not cut a hole in my ceiling – the cut-out diameter is 330mm. Instead I placed the subwoofer on the floor in the subwoofer corner of my office, carefully held in place with weights. I  switched the mode dial to the 4OHM setting to use with a regular amplifier. For power I used a Marantz
MA700 monoblock power amplifier. It’s about 15 years old, I think, but it remains very competent.
Importantly, it can deliver some 300W into 4OHM loads. I didn’t want the subwoofer held back by a lack
of power.

I fed the input of the Marantz with the subwoofer output of a Denon AVRX3500H home theatre receiver, using a high quality five plus two height channel set of speakers and allowed Audyssey to run its  calibration. Being cautious, I started with the level trim control on the Marantz down at 50%, but that  proved too low. Around 75% turned out to be a suitable level for the calibration to work properly. A full 100% was a touch too high.

After Audyssey had finished, I made sure all the speakers were set to ‘Small’ and set their crossover frequencies to 100Hz to ensure that the sub was carrying the great bulk of the bass load.

Imagine a regular ceiling speaker. Now imagine the same, but bigger. you are now imagining the Redback C 1065 subwoofer.

Then I started on some stereo music, going mostly for bass-strong stuff . The album Sailing the Seas of Cheese by Primus was handled with great authority by
the sub, with Les Claypool’s deeper bass strings fully delivered and the kick drum pumping out cleanly, with plenty of power. With the whole system turned up to  levels loud enough to irritate the neighbours, the subwoofer easily kept pace and level while remaining tight and clean.

Of note was the track Jerry was a Race Car Driver which opens with a low but loud blast of exhaust noise from a race car. That sounded particularly realistic.

Then I went on to The Police. The track Wrapped Around Your Finger from Synchronicity was delivered with a very strong opening, with a powerful and clean bass theme accompanied by that powerful kick. It was only near the end when the bass strays for a note or two into its very lowest register that the level faded. To be fair, I’m used to hearing this with my regular subwoofer, which is a 15”, 400W unit that’s good down to 16Hz.

Then, rather than fiddle with some movies looking for impressive bass, I went to a 1998 test CD. This is a 5.1 channel DTS CD from Telarc, a surround sampler.

The first thing this established is that the subwoofer driver is a long-throw unit. The opening track – fittingly called Surround Madness – opens with an enormous infrasonic blast which I’d quite forgotten about. The driver was visibly vibrating furiously (I had the grille off ), but producing little valid sound. Clearly
that was below its effective range. Later some somewhat higher but equally loud bass underpinning was clearly hitting the tuned frequency of the bass reflex port.
The sound of the chuffing – the noise of the air flowing to and fro through the port – was quite loud.

So, yes, there were limits. That stuff was outside of what a subwoofer should reasonably be called upon to deliver. Over the years Telarc seemed to take a certain
pride in trying to break stuff . The various music demo tracks, though, were very nicely handled, with the bass (remember, everything below 100Hz) being carried
for the whole system smoothly and musically.

I went back to regular movies after all. The Edge of Tomorrow was delivered impressively, the sub handling everything it had to offer, which is a lot. And with
no chuffing or other untoward behaviour.

Then I measured the subwoofer’s output. I confess, I could not believe the results. Worse, I thought perhaps I ought to retire. The graph of measured output, with
the microphone about 300mm away to ensure it captured both the driver and the bass reflex port, looked like a picture of a mountain peak. The peak was at 75Hz with the output dropping away very sharply to both sides of that. At -6dB were 61Hz and 93Hz. For 40Hz, which is what you need for an effective bass drum, the level was some 15dB down from the peak. There’s no way that’s what I heard.

But what I had done was switched off the Audyssey EQ for the measurement. I’d done my listening with Audyssey EQ switched on. I had this vague idea that the system did not EQ the subwoofer. It turns out that I was wrong.

With Audyssey on, the output peaked at 62 and 98Hz. Looking at the graph with charity (remember, narrow variations can often be room effects) the response was something like 41 to 150Hz ±4.5dB. The output was fairly solid down to below that 40Hz boundary.

That establishes two things. First, this subwoofer is probably not a good choice for systems which do not EQ the subwoofer output, although it’s rather good value for money for those which do. Second, it proves  that Audyssey MultEQ 32 does indeed equalise the subwoofer.

I wouldn’t suggest the Redback C 1065 subwoofer for really high-end systems, but for modest to middling systems where hidden drivers are a priority, it could well be just the thing.