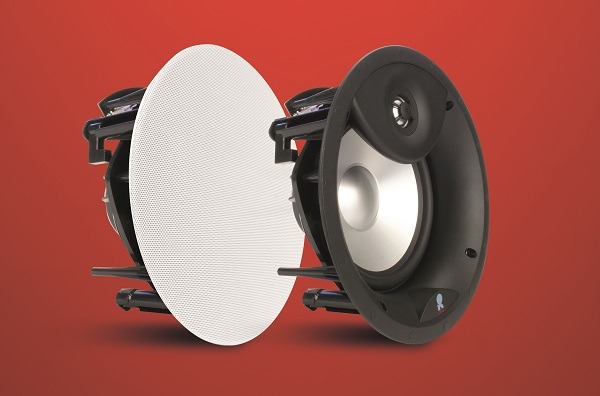 I have a soft spot for Revel. My first experience of a real subwoofer – one that I could feel physically pummelling me – was a Revel sub inconspicuously installed in a large home theatre demo room. It must have been twenty years ago. It introduced me to the glories of sub-20 hertz bass.

But, of course, the Revel C283 in-ceiling loudspeakers are very different to that.

The Revel C283 are round, reasonably priced, high performance installation speakers, primarily intended for ceiling placement. Revel actually has half a dozen 6.5-inch ceiling speakers, and four 8-inch models in its range, along with a couple of unusual designs. The C283 speakers are the entry level amongst the eight-inch models.

Apparently it is the aluminium cone woofer which marks it as entry level. The three higher models have a micro-ceramic composite cone woofers. The two top models have cast aluminium frames for the woofer, while the two lower models have frames made of cast polymer, which to my eye looks like ABS.

The C283 is a two-way model. Higher frequencies – the crossover frequency isn’t specified – are handled by an aluminium dome tweeter. The specifications say that it’s a “Swivelling Tweeter”, but I could not move it on the three units I tried. I am reluctant to apply undue force, so perhaps it’s possible. The face of the tweeter is covered and indeed somewhat protected by a wave guide, held in place by four thin arms.

All this sounds pretty standard, really, but less so once you actually have these speakers in hand. Clearly Revel has not designed them with the aim of the least possible mounting depth. Indeed, that is specified at 130mm (the other three models require a little more than that.) The main reason for that is that the woofer is set back at quite distance from the front of the speaker. The leading edge of the rubber roll surround is inset by around 45mm.

Neither is the tweeter suspended over the middle of the woofer. Instead, it sits in a curved plate attached to one edge of the speaker surround. When installing, you should pay attention to the orientation of each speaker to ensure that the tweeters are equidistant from the listening position.

At the back is a proper crossover network – Revel describes it as a “high-order crossover network [which] delivers accurate timbre reproduction.” It consists of three inductors, two capacitors and one ten-watt resistor. Cable connection is via the only cheap-looking part of the speaker: a pair of old-time-style plastic spring clips.

Revel is a little light on for specifications. It doesn’t specify a frequency response, nor even impedance. That last is a definite oversight. I’ll return to that later.

Installation was straightforward. I stuck a pair of the speakers in my usual test box, a leaky chipboard enclosure measuring 120cm by 60cm by 30cm. There’s no way that I can replicate the myriad of environments in which these speakers might be used. But I assume less than perfect rigidity in the baffle – generally it will be Gyproc – and a fairly large space behind the drivers. Which is what my box more or less provides.

Installation was simple. Cut the holes to the right size, pull through the speaker cables, insert them into the spring clips, push the speakers into the holes and then rotate each of the four mounting screws until the arms at the back swing out and lock the speaker into place. There were a lot of turns, so I’d suggest using a drill with the rachet turned down to a very low torque to avoid damage.

Apparently, a back box is available as an optional extra. Because the woofer is set so far back into the unit, the rear of the woofer cone is fairly well protected from ceiling debris by the cage and a backplate. Nonetheless, the rear of the rubber roll surround is exposed to stuff falling from directly above. Back boxes tend to result in a quite heavy acoustic suspension, limiting bass performance. I’d suggest simply installing a 30cm by 30cm, or larger, MDF sheet above the speaker to protect it from dust and whatnot.

As usual with these things, I had the speakers in the above-described box on some stands, acting as a stereo speaker pair. (Any assessment of the performance of ceiling speakers from what they’re doing in a Dolby Atmos system would be almost entirely imaginary.) The tweeters were uppermost.

Now, in any actual installation these speakers are going to have suitable EQ applied by Audyssey, DIRAC or some broadly similar system. Instead, to get a sense of the natural sound of these loudspeakers, I drove them with a straight, unadjusted signal using a compact audiophile amplifier rated at 200 watts per channel into the load represented by the speakers.

Laura Marling on ‘Once I Was an Eagle’ was nicely present, upfront, and with the sibilance captured by her microphone on full display. Perhaps a bit more than full. There was no diminution of it at all, and perhaps as slight emphasis.

The early Elvis Costello track ‘Watching the Detectives’ has the all-important bass line delivered in full, if very slightly recessed compared to my usual system. I had a sound pressure level meter running beside me as I was listening to this, and it noticed that the sound peaked at 98.2 decibels during this track. And that is loud!

Another Costello track – ‘I Want You’ – had the bass underpinning very nicely solid, although his voice was quite bright and crunchy. Which is what it is in the recording, if not perhaps quite so much. Again, this track was peaking at above 97dB (C-weighted). A little home theatre EQ would have nicely tamed that brightness.

And that’s the important thing here. These speakers can deliver wide-ranging sound, cleanly, loudly and with minimal distortion. A few wobbles in the frequency response are easily corrected with home theatre EQ.

Seeing as how Revel was rather coy about some of the specifications, I decided to try to determine some of them. In particular I was interested in the bass end. Measuring one of the speakers with the microphone placed close to its woofer’s cone, the response was extremely smooth – as close to ruler flat as you’re ever likely to see in a loudspeaker, from 55 hertz to 1,000 hertz. Below 55 hertz the output diminished at 9dB per octave. In a home theatre context, I’d suggest setting the crossover frequency to 60 hertz, although you could probably get away with 40 hertz.

Measuring up close to the tweeter, the output was within a plus or minus 3 decibel band from 50 hertz to 7,000 hertz. Above that the output increased significantly to peak at +12dB at 15,000 hertz, beyond which it fell away to be -6dB at 20,000 hertz.

That boost in the upper treble doesn’t produce an obvious colouration in the sound, unlike a boost in the 2,000 to 5,000 hertz region which tends to make the sound irritatingly harsh. In fact, it tends to add a sweetness, which explains some of my listening impressions.

Actually, before doing that, I tried cheating by simply measuring the DC resistance of a speaker. That came in a dead on four ohms. That seemed a bit low to me, even though that is typically a reasonable centre measure. It turned out that it wasn’t a bad estimate. The eleven frequencies I measured gave results of between 1.8 ohms (at just over 20kHz) and 7.6 ohms (at 160 hertz). The average of the eleven measures was 4.2 ohms.

Amplifiers comfortable with nominal four-ohm loads should be okay, but since we live in a world in which many home theatre receivers want you to change their settings for low impedance loudspeakers, this figure should be specified up front.

Oh, and note, most Yamaha home theatre receivers – even very expensive ones – do not support four ohm loads with anything other than their front two channels. So these speakers would not be suitable for use with a Yamaha without risk to the Yamaha’s warranty coverage.

I wouldn’t hesitate to install the Revel C283 speakers in my ceiling. A little tweaking by a home theatre receiver, and they’d deliver just the sound that I’m after, which is natural and accurate. The  nicely extended bass simply adds to their appeal.