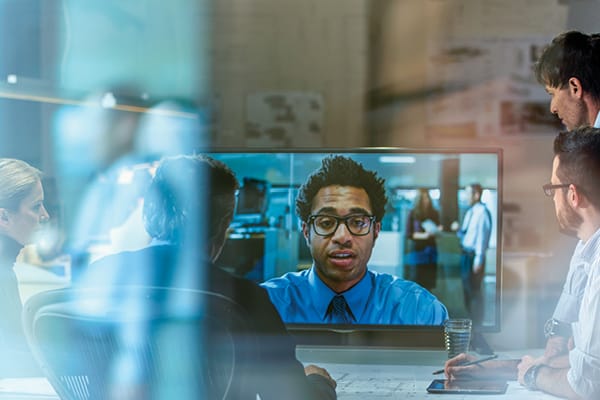 A new Standard focuses on the science of lighting, and a design guide covers the art. Paul Skelton investigates both aspects.

Video-conferencing has made communicating over great distances a lot easier and more personal than ever before.

It helps grandparents to stay active in their grandchildren’s lives and lets business people maintain relationships with suppliers and customers.

But have you ever been on a Skype call and thought the other person looked ill? Chances are that you were just noticing the bad lighting.

For most people the video-conferencing priority is the camera. People often get bogged down in hardware specifications and ignore the bigger picture – the room in which it is installed.

Brooke Silber is a principal at Jan & Brooke, Luminae LLC in New York. She also works with the Audiovisual and Integrated Experience Association (AVIXA – formerly InfoComm International) where she chairs the technical committee behind a new Standard titled IES/INFOCOMM RP-38-1X Video-conferencing Lighting.

She is on a mission to ensure integrators understand the importance of lighting design in video-conferencing applications.

“About 15 years ago I was looking for information on lighting design for video-conferencing but found almost nothing.

“Everything that was written on the subject came from the broadcast television industry, so it wasn’t really relevant. This caused me to go back to school and get a master’s degree in lighting.”

Specifically, Brooke’s thesis was on lighting for video-conferencing using distance education as a vehicle for testing. So, she literally wrote the book on the subject.

Her work, along with the efforts of about 30 other members of the industry, has led to the development of IES/INFOCOMM RP-38-1X.

This Standard provides lighting parameters and performance criteria for small and medium-sized single-axis video-conferencing spaces – defined as one set of video displays and cameras oriented towards a group of seated participants.

The Standard offers guidance to professionals involved in the design, construction, assessment and support of video-conferencing environments. It establishes performance criteria for the design and testing of room lighting and finishes that will provide appropriate picture quality.

“Imagine you’re the CEO of a large organisation and are preparing to participate in a video call,” Brooke says.

“It’s important to present yourself in the best possible light, but the room in which you’re sitting has horrible ambient light problems or strong reflective surfaces. The result will be pretty bad.

“Of course, you could get your IT team to treat the call in the same manner as a television broadcast by setting up individualised lights for each person involved. But it would be pretty uncomfortable for somebody to sit perfectly still for two hours in a meeting and it would be pretty invasive.

“As lighting designers, we believe people should feel natural so that communications flow just as naturally as they would if everybody was in the same room.”

The role for designers and technicians is to educate clients on the importance of proper lighting while keeping within the constraints of the room and the budget.

“When it comes to lighting design for video-conferencing, it really depends on who is talking about it.

“Let’s say a facility manager has contacted an installer and they’re looking at putting in a video system. They are most likely locked in to a specific room in which the equipment can be placed, so they’re going to do everything they can to make it work within the confines of that room.

“They won’t think about allocating any of the budget to lighting. They’ll probably be thinking about putting it towards the best AV system on the market.

“Working with an architect on a new build, however, is a little different. Architects are more likely to give some thought to the subject but then will inevitably focus on making it work aesthetically with the vision they have for the rest of the office.

“They don’t often determine how to light the room specifically for the task of video-conferencing; rather, it will likely be treated as a multi-purpose space.”

So, it is important to think of ‘video-conferencing’ spaces as ‘multi-purpose’ spaces.

“In my opinion it is irrelevant whether the space is dedicated or multi-purpose. In either case, the first thing I do is take into account two very important considerations. The first is the occupant of the room and the second is the person on the other end of the camera (or more simply, the camera itself).

“If you think about it this way, it’s less about what the camera sees in the room and more about what happens in the codec and how the information is condensed then uncondensed on the other side.

“The two things that happen in any conference setting is communication and, if we’re being honest to our vain selves, how we look. We all want to look good.”

One focus for the AVIXA technical committee when writing the Standard was how the information is translated through the codec.

“Consequently, we changed from a metric of illuminance, or ‘lux’, which is not what a camera measures. Instead, everything in the Standard relates to luminance, which is ‘brightness’.

“We also talk about ratios of luminance – foreground and background. That is to say, the ratio of fill lights to key lights. We even look at the distance from the table to the person so that, regardless of the finishes in the room – which do matter tremendously – you don’t have to worry about it. It’s a dialogue.

“But you don’t need to have a 50% grey table, which would be a ridiculous thing to include in a Standard.

“It’s going to be a huge change in the way that people think about, measure and design these spaces.”

Brooke says it’s all about considering how a camera ‘thinks’ and how the codec relays that information.

“People want to ‘see’ what other people are saying. They want to be able to read non-verbal cues.

“I want to be able to read someone’s lips, because that tells me who is speaking. It becomes very difficult to do so if an image is obscured by shadow. As an integrator, you have to make sure that light is coming from the right direction to avoid shadowing.

“Another visual cue is where someone’s eyes are directed. If they are wearing glasses, you’ve got a lot of reflections to contend with.

“These are things we often take for granted when sitting across from one another. Therefore, it’s very important to achieve the same effect over video.”

The best way to look at it is the old saying ‘garbage in, garbage out’.

“If you have a bad camera the result will be bad – lighting won’t fix it. If you have bad lighting, it doesn’t matter how good your camera is – you’re going to have a bad picture.

“If you have a low-quality camera, it typically will not have the same dynamic range of luminance ability that a good camera has. The contrast ratios will make dark shadows darker and the highlights brighter, and that is very difficult for the codec to translate.

“If you have too low illuminance on the back wall, your camera will ‘crawl’ or ‘creep’ in the corners. This means the codec has to work a lot harder because it’s constantly trying to resolve the image.

“Further, if you have too much of a dynamic range in the colour temperature then the camera is constantly trying to figure out how to white balance the scene. Often it will settle on something like the ruddy complexion of somebody’s skin, which means the background might look a little green.”

The team behind the Standard is also developing a design guide to be released at a later date. It will act as a companion piece to the Standard and will include a bit more discussion about topics such as geometry.

“Everything depends upon where fixtures are positioned. If they’re not positioned right, it may be too hot on the table and not enough on the actual face. Or it might be too hot on the face, so the face is too bright compared with the background. That ratio doesn’t work either.

“So the correct ratio is based on how you design the space.

“Then there’s the complexion of the people using the space, which is why we use ratios and base things on a cross-section of complexions across the world. That’s a hard one. You have no idea what people will look like before they walk in.

“Lighting is an art as well as a science. The new Standard focuses on the science, and the design guide is a bit more about the art.”

The AVIXA Standard is in editing, waiting for final approval before publishing.