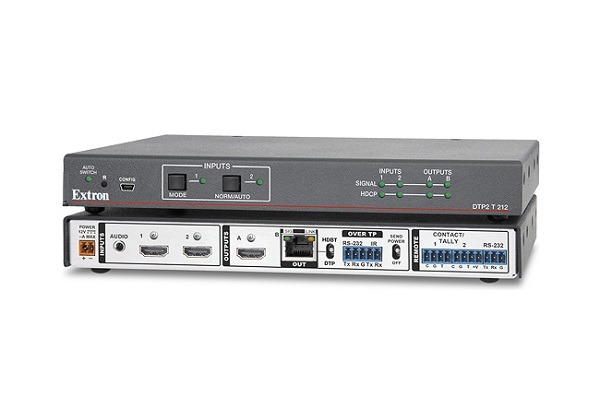 Extron has announced the immediate availability of the DTP2 T 212, a two-input twisted pair transmitter for sending HDMI, audio and control to a DTP-enabled product.

It gives integrators two HDMI inputs, one DTP2 output and one HDMI output to support a local monitor.

The HDCP 2.3-compliant transmitter accommodates data rates up to 18Gbps and supports video resolutions up t 4K/60 at 4:4:4 while the integrated DTP2 transmitter enables signal extensions up to 100m over one shielded CATX cable.

Audio and bi-directional control are transmitted alongside the video signal, streamlining integration.

The DTP2 T 212 transmitter drives the DTP2 and HDMI outputs simultaneously with the selected signal.

In addition to data rates up to 18Gbps, it supports Deep Color up to 12-bit, 3D and embedded HD lossless audio formats. Other integrator-friendly features include EDID Minder, auto-switching between inputs, and bidirectional RS-232 and IR pass-through for remote AV device control.