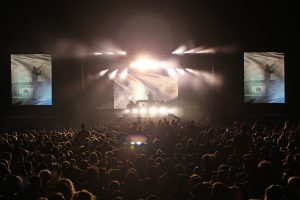 AV in action at Spilt Milk

The VuePix Infiled screens dominated the production with over 290 LED panels being used across the two main stages.

The Stage 1 featured two IMAG screens, consisting of 33 VuePix Infiled ER4.6 outdoor panels each. The visual centrepiece of the stage was created by additional 45 VuePix Infiled ER4.6 panels, set up to compliment the various artists performing at the stage. The content was managed and optimised by two Novastar MCTRL 4K Senders and two RGBlink X1 Scalers.

The main screen on Stage 2 consisted of 90 VuePix Infiled E12 panels, creating perfect visual backdrop for the acts. The IMAG screens set up on each side of this stage featured additional 90 ER4.6 panels in total. The content was controlled by Novastar MCTRL 4K Senders, a VuePix Infiled T7e Sender and three RGBlink X1 Scalers.

The lighting on Stage 3 was controlled by ChamSys MagicQ Stadium console. The Acme lighting IP rated MultiPARs 400Z were used on the Bacardi activation stage.

This has been the third year that the Elite Event Technology team has provided production for Spilt Milk.